Kings in Germany at the Balve Hohle!

The High Kings took a short break from their festivals in the US to make a whistlestop visit to Germany for their first ever performance at the Balve Hohle. The event was an overwhelming success winning them many more new fans as well as finally delivering a dream to those German fans that had been patiently waiting to see them live in their own country.

There were a number of videos taken on the night and this player contains a selection for you to help you appreciate the atmosphere and amazing reception they got when they took to the stage. They did their full show, going through without a break, and then returned for the finale to join Na Fianna and the Keltic Kats for Go Lassie Go. You can watch that, and a selection of songs from their set, on the player.


As well as the official photos, some of the German fans lucky enough to be at the show on Saturday night have also generously allowed us to use their photos and share a little of the experience with them.

We would also like to thank Uta Baumeister from www.festspiele-balver-hoehle.de very much for sending us the following press cuttings from the German newspapers covering the event. The text is understandably in German and huge thanks to Thomas Loffel for very kindly giving an over view of the content of the articles for the benefit of the non German fans.
08.08.2011, Süderländer
High Kings let the Cave quake!
10th Irish Folk and Celtic Music Festival at Balve with 3500 visitors.

The High Kings commented that the venue and the mood was brilliant. During the 3 days of the of the10th anniversary festival, there were 3500 visitors to Europe's biggest cave. The highlight and Saturday Night's main event was the High Kings. The group, with all their CD's achieving Platinum status, interrupted their US tour for the performance in Balve. They rocked the cave from the first moment they appeared on stage. They gave us more than 2 hours of excellent entertainment. The article mentions 2 encores, but Thomas corrected that there had been 3. The audience had been 1200 people on Saturday Night, who also got to see, Craic from Germany, Keltic Kats from Kilkenny,  and Na Fianna, a young group from Ireland. Between the performances the 1st Sauerland Pipes & Drums filled in with Scottish Music while the stage was re-organised. There were visitors from almost all parts of Germany from Hamburg to Munich and even people from Italy and France. The festival was a great success for all groups and bands. High Kings release storms of cheering in front of 1200 visitors!

Sean Reeves commented that the 10th birthday of the Irish Folk Festival succeeded much more than expected. A great firework of Irish and scottish music. Sean Reeves, the organizer of the festival, was very proud to get the High Kings for 10th anniversary of the festival. The article mentioned that all members of the High Kings are sons of legends of the Irish folk scene, although we of course know that Darren isn't, and Sean Dunphy was actually known as a Showband singer. It went on to say that they had interrupted their US tour for their first concert in Germany and that their CDs in Ireland and the States are Platinium. They did an excellent more than 2 hours lasting performance without a break. 1200 visitors were thrilled and cheering and the High Kings showed enthusiasm, power, and great expression during the acapella parts like: Red is the Rose, The Old Triangle and the special version of Go Lassie Go/ The Dutchman.
They although mention here the other groups and bands: Craic, Keltic Kats, Na Fianna and The 1st Sauerland Pipes & Drums. There was great praise for everybody.
The article mentioned that many songs were played more than once time, for instance Dirty old Town, Rocky Road to Dublin, Whiskey in the Jar and so on, but that it was very interesting to listen to the different versions of all the groups. At the end of the event, all groups that had performed on Saturday came on stage to perform a last song together and say goodbye to the audience. The festival was a great success and all the people were happy and enthusiastic about the High Kings. 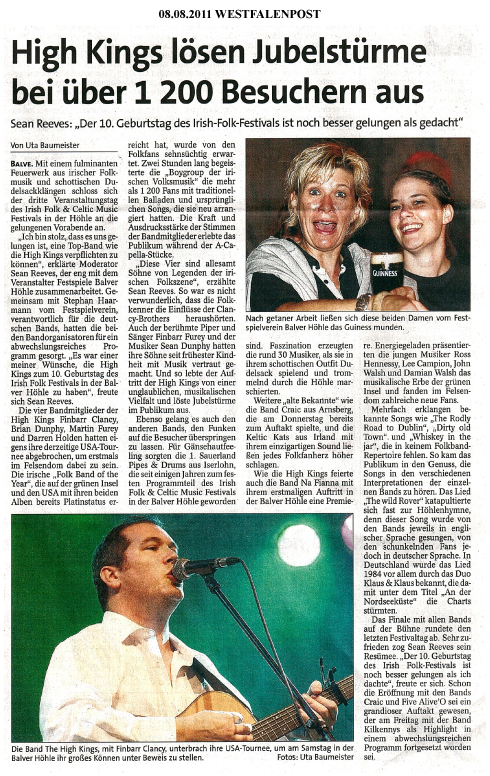 09.08.2011, Westfalenpost
New stage provides a unique atmosphere
Soundproblems because of Bands own mixers. Hopes for a light financial plus

The decision to change the concept for placement of the stage for the festival at club Balve proved to be right. The Club' s bosses decided not to build a stand, because of  financial pressures. Sean Reeves, the event organiser, commented that he´d been very sceptical about  placing the stage on the dance floor and not in the right hand cave arm, like in former years. But it turned out to be a positive surprise for all. The acoustics were brilliant, cause the bands now played directly into the cave.
A very special and unique ambience was created this way and a special installation of the lighting brought the cave into the right place. The sound was a great point of discussion in the audience. Sometimes ingenious, at other times totally mushy. Technical boss Stephan Haarmann commented: All bands with their own sound mixer sounded bad in the beginning, it´s very difficult for a soundman to work in a cave. Anybody who´s not willing to listen to the advice of the cave pros will have big problems. The High Kings had to fight this point when they started with the performance, but they made it in the end by boundless enthusiasm. It is written in the article that the High Kings actually wanted to do a short gig and go back to the hotel, which was completely untrue, they knew they were booked as Saturday Night main act and they were on fire for their first concert in Germany. 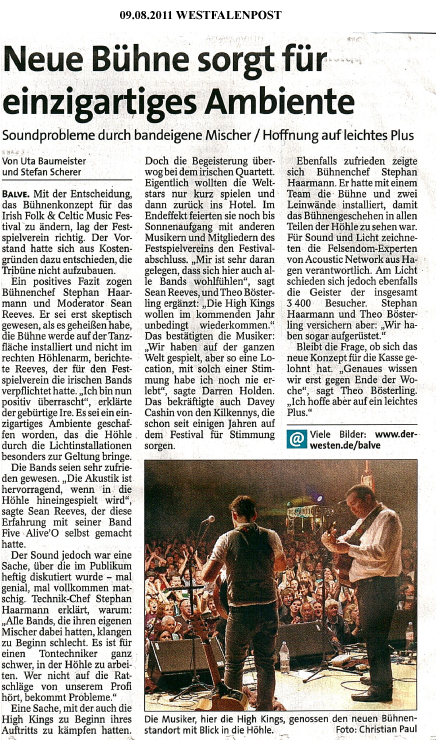 Google translation of an article from Celtic Rock Music in Germany. To read the original article in German www.celtic-rock.de/en/archives​/11948 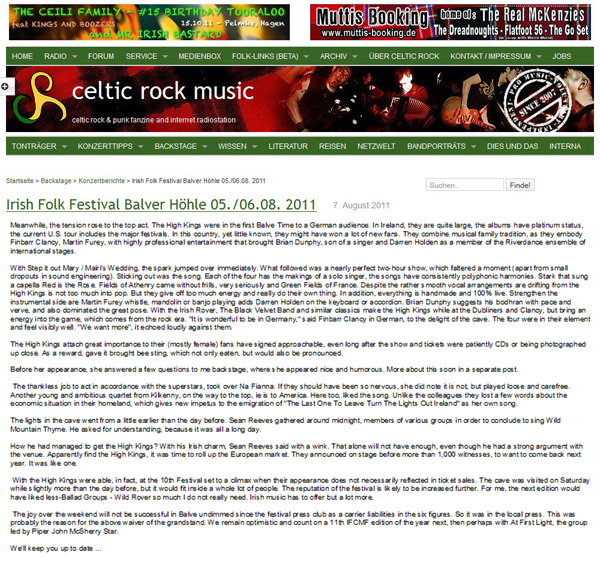 The High Kings did an interview for Celtic Rock while they were in Germany. The interview has been transcribed for the Celtic Rock Music website. This article is in German, but if you paste the URL in to a Google search it should bring the page up as the first link with an option to translate the page.
Celtic Rock Interview

That is all we have for you from Germany for the moment, although we will soon have a recording of an interview the High Kings did with Peter Greb for a German community radio "Radio Unerhört Marburg" and for the internet radios www.birdhillradio.com, Ireland and www.earsradio.com, USA soon!
You can listen in live to the interview!!
Saturday 13th August
www.birdhillradio.com
"We will start at 7 pm Irish Time and 2 pm Eastern Standard Time in the USA. You will get an evening with a lot of good music, most of it from the Irish Scene, old and new. There's an interview with the Irish Group "The High Kings" (Finbarr Clancy, Martin Furey, Darren Holden and Brian Dunphy) on their trip to Germany. They did an outstanding concert in Balve. We will talk about it. Please join us for this "Big Irish Night" on www.birdhillradio.com and enjoy the music. We hope to see you all in the Chat of birdhillradio.com."
Stop Press Latest!!
Special thanks to Anne and Peter Greb for giving us a recording of the interview they did with the High Kings while they were in Germany. You can listen to the interview and their recording of 3 songs from the show on the player on www.darrenholden.net
We'll leave Germany with a few words from Darren as he arrived back in Ireland!
"Just landed back in Dublin after an amazing night in Germany!
Massive crowd and on the more memorable shows to date.
Now.....Come on The Cats!!"

The Kilkenny Cats won their All Ireland Senior Championship Semi Final and will be heading for the final again this year! A good weekend all round for Darren!
He is now heading back to the US with the rest of the High Kings to take up where they left off with a series of Irish festivals. We'll be back with more news from the US as soon as we have it.


Posted by Darren Holden Official at 19:14