Irish Tour Round Up, Tour Dates, Kilkenny, and More.....

“Very proud to be launching The Kilkenny International 'Gospel Choir Festival 2016' at City Hall Kilkenny, tomorrow evening at 5pm. I will be joining Mayor Joe Malone, local dignitaries and press, and of course the wonderful Kilkenny Gospel Choir, led by the brilliant Fr Willie Purcell.”

“I will chatting live on KCLR FM after the 10am News and Weather this morning in advance of this evenings International Gospel Fest launch at City Hall.”

Listen to Darren chatting with John Masterson on KCLR FM ahead of the Gospel Fest launch in Kilkenny.

“Great evening spent at home in Kilkenny launching the 2016 International Gospel Festival.
Thanks to Mayor Malone and his staff at City Hall for the lovely welcome and to Willie Purcell for looking after us so well.” 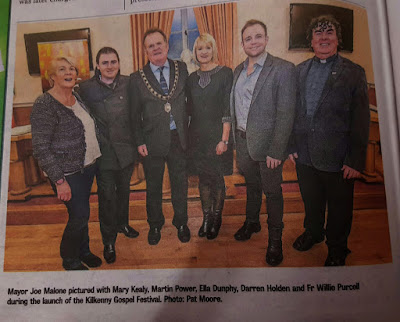 Christmas Eve 2010, we were very proud to launch Darren's brand new Official Website. 5 years on, we continue to keep it updated with all the news and to develop the Press, Photo, and Video pages as a comprehensive record of Darren's career both with the High Kings and as a solo artist. We're now approaching 280,000 views! Thanks for your support everyone!

High Kings in the Recording Studio!

Update from HKHQ: “Day 1 in the Studio! At The Production Suite with Chris & Graham.” 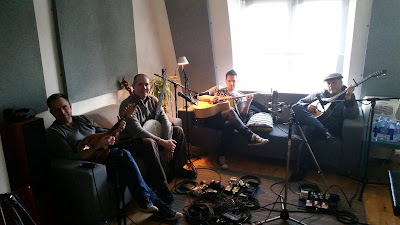 Update from HKHQ: “We are honoured to be a part of this very special evening in the National Concert Hall in Dublin on Wednesday. This very worthy cause deserves your support. We promise a very unique HK performance on the night. The array of talent on show on the night is truly astounding!” 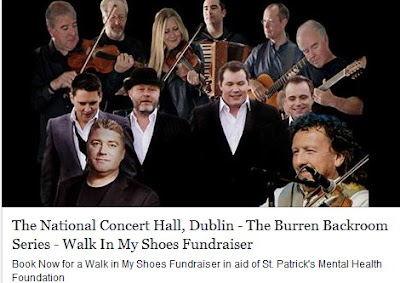 “In advance of 'The High Kings' joining an array of Irish talent for the 'Walk a mile in my Shoes' event tomorrow night at Dublin's National Concert Hall, I will be joining the shows organiser Tommy Mcarthy and the team from 'Ireland Am' on TV3 tomorrow morning after 8am, to discuss our involvement vas why this charity continues to be so very important and crucial.”

Darren on the couch of Ireland AM promoting the second annual fundraising concert in aid of St Patrick's Hospital at the National Concert Hall (including a little vocal treat of Red Is the Rose). Sitting along side him was organiser of the event Tommy McCarthy, and Musician Edel Fox. The High Kings were one of many artists performing at the event later that night. 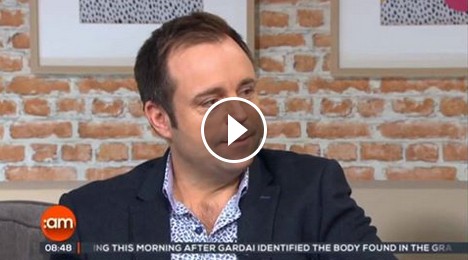 “Shenanigans at The Concert Hall with this guy.” 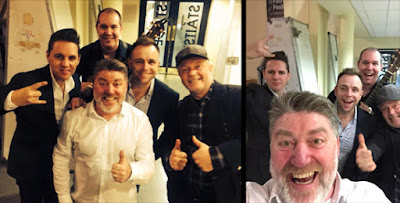 What’s On Magazine Artist of the Year Award

Update from HKHQ: “We were honoured to be presented with Whats On Magazine 'Artist of the Year 2015' Award at the Cork Opera House on Saturday night. Publisher Jamie Sinclair made the journey from the UK to make the presentation in person. Many thanks Jamie!” 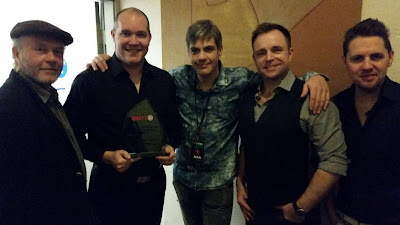 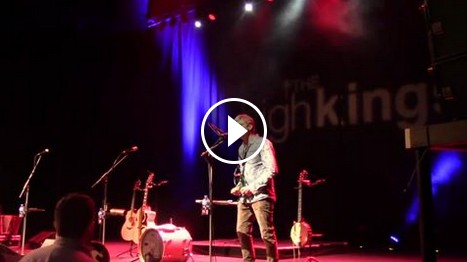 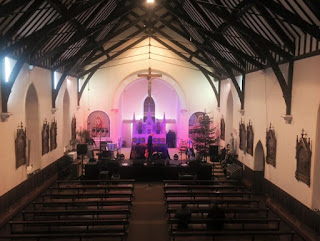 “Big thanks to another sold out audience last night at The church of the immaculate conception, Glin. An incredibly warm welcome and a night to remember.
Tonight, it's the Strule Arts Centre in Omagh.” 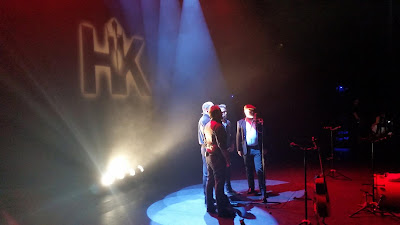 “2 fantastic sold out concerts at the Burnavon Theatre Cookstown, completes the pre Christmas tour dates. Thanks to the huge amounts of folks who came out to see us over the weekend!
Driving home for Christmas.”

“Big thanks to a fantastic Letterkenny crowd last night on our first post Christmas concert. Great night.
Tonight, it's the big one. The Ulster Hall in Belfast.
Last time I performed there was on December 26th 1995, on the Boyzone UK and Ireland tour.
20 years and 2 days later........”

“The old lady. Ulster Hall. Ready to Folk and Roll at 8pm” 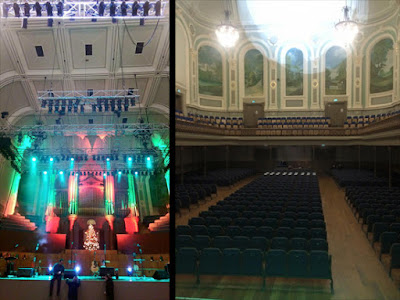 “Belfast! Incredible. The volume from you guys was scary. We've found our spiritual home in your city at The Ulster Hall. Massive thanks for a great night.”

“To the sold out audience at The Ardhowen Theatre, Enniskillen tonight....thank you. Not only did you brave the elements of a wild night to be there, you brought a folkin' party! Great stuff.”

“After 106 concerts in 2015, we wrapped it up for this year at a sold out 'Market Place Theatre' in Armagh. Fantastic crowd. Some brilliant banter and laughs. No more shows 'til next year!
Thanks to everyone who caught a show somewhere in the world this year. We couldn't do it without you.” 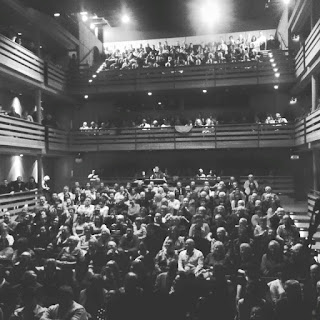 “Kicked off 2016 tonight with an absolute stormer at Racket Hall in Roscrea. What a crowd. The place was wedged and the atmosphere electric. Thanks to everyone who again braved the weather to come out for the show. Much appreciated.” 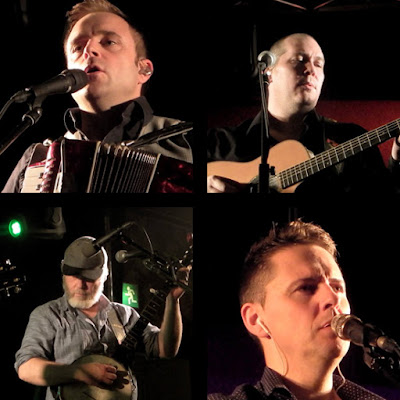 “What more can we say about Derry audiences? Mere words never do these folks justice. The very best of the best. Another sold out Millennium Forum concert, and the loudest crowd so far on this tour. As I've said many times before, 'The Town I've Loved So Well' is your song, and it's my pleasure to sing it, but tonight's reaction and standing ovation almost floored me. Truly, one of the best nights we have had so far. Thank you Derry!” 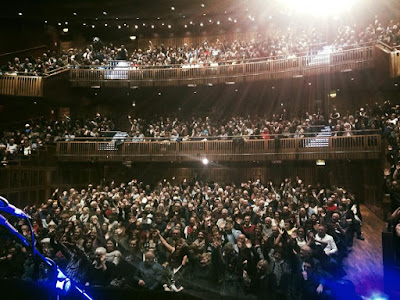 “Newry. Epic. Thank you for giving us another fantastic night. Tonight's 'Whiskey in the Jar' was definitely heard by Philo!” 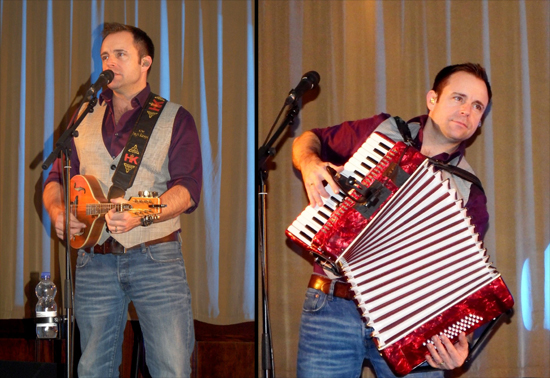 “Playing this beauty for the first time tonight!
The National Opera House in Wexford.” 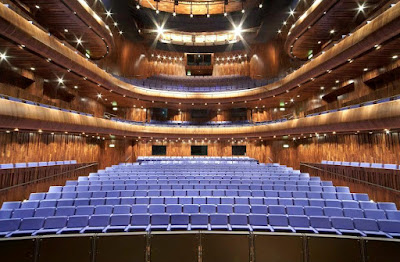 “Wexford! One to remember.
Thank you!” 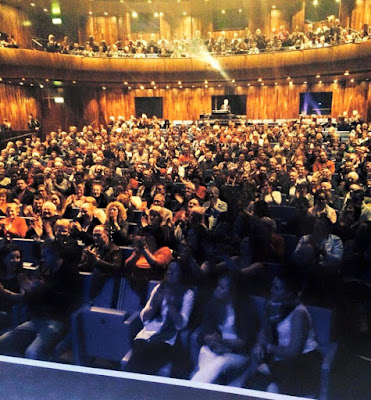 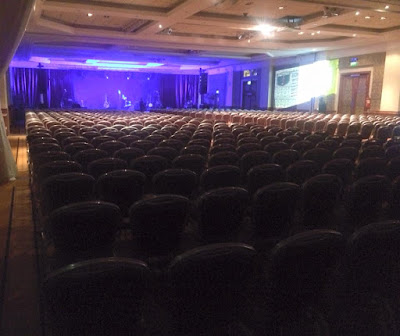 “Tullamore last night was just off the scale. Tremendous volume and great atmosphere. Thanks to Michael Duignan and co for taking care of us so well.
On route to Galway to play at Seapoint Tonight.
Last gig there was a complete sellout. Onstage at 8.15pm.” 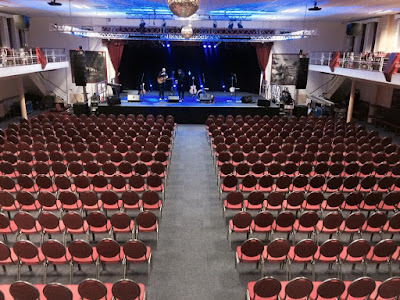 “Galway. You were incredible. The West was awake tonight!” 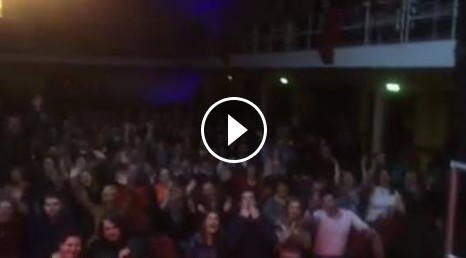 “I will be chatting to Geoff Harris on WLR FM at 12.30pm today ahead of tonight's sold out High Kings concert at The Theatre Royal, Waterford.”

Listen to Darren chatting to Geoff Harris on WLR FM ahead of the show at the Theatre Royal Waterford. 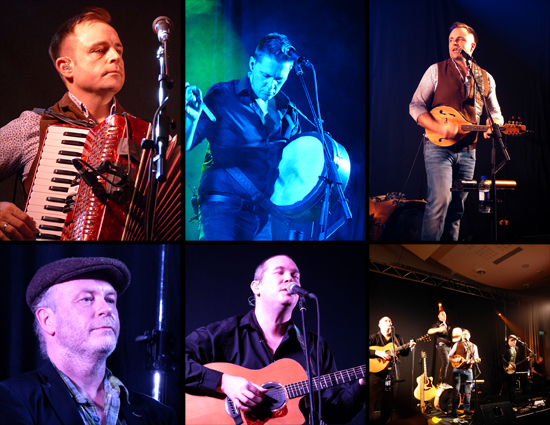 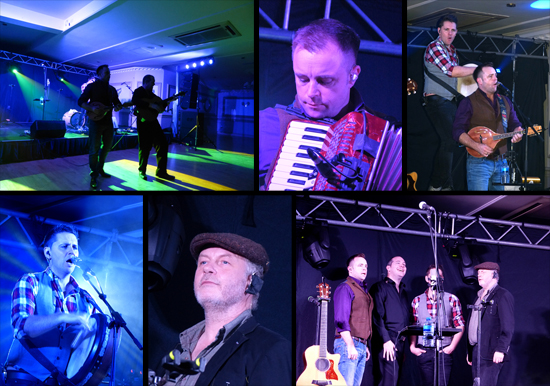 “Cork Opera House. What a way to finish a tour. Completely crazy audience. Best fun we've had on these dates.
Big thanks to our crew Ronan, Bobby, Vivien, Paddy, Jamie, Alan and co for a stellar job throughout as always!” 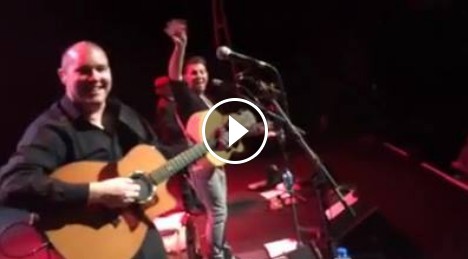 Dates have now been formally announced for the early part of the year, with more promised for Germany, UK, US and more... Keep watching the High Kings official website and Facebook page for more dates to be added.

Our first ever Canadian Show!!

"As part of the Toronto St Patrick’s Day Celebrations, our good friends at IUOE Local 793 are hosting our very first show in Canada on Sunday 13th March, check out the story HERE and how to get tickets. Be quick, they are selling to fans from all over Canada!" 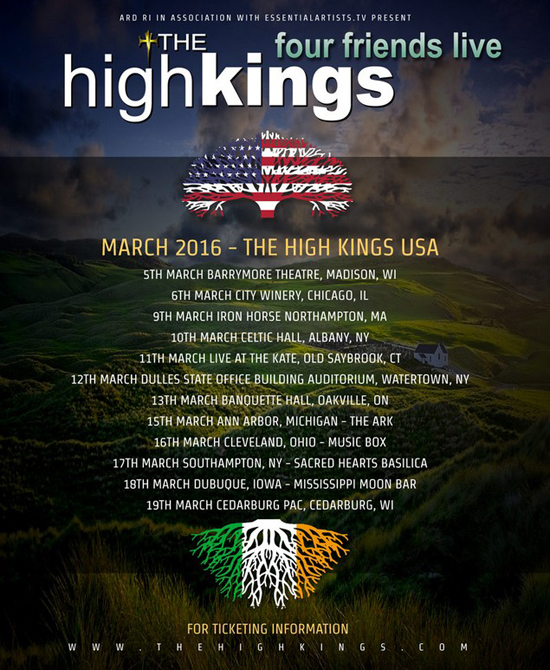 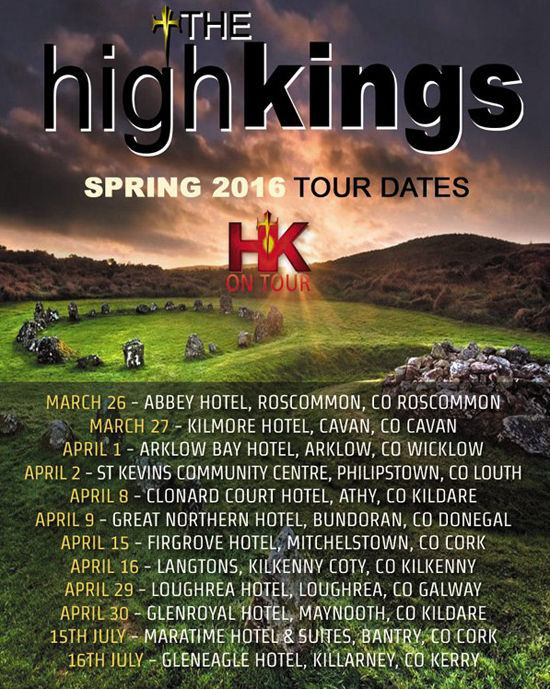 Sadly, aside from the news from the recent events and Irish Tour, Darren's updates have been mainly sharing memories or sad news.

“Hard to believe it's been 30 years since the sun went down on our greatest Rock Star.
Irreplaceable. Icon. Rocker. Wild one. Black Rose. Irishman. Dubliner. Philo. RIP.” 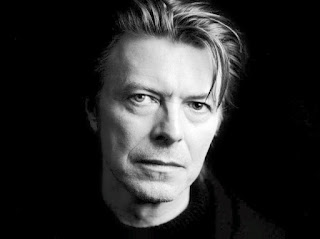 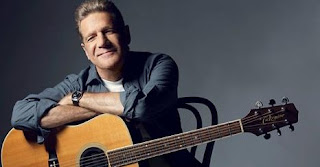 “It's all becoming just way too much……So sad about this one. RIP Glenn. Rip Eagles. Thank you for the soundtrack to our lives.” 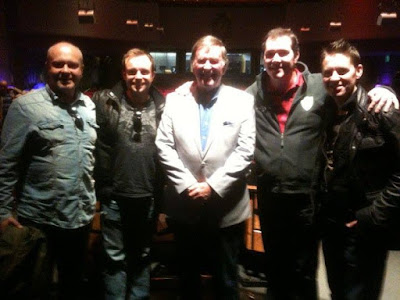 "HK had the pleasure of meeting this true gent at BBC Radio a few years ago. A quality Irishman who went for it, and made it in a big way.
He will be missed.
RIP Terry Wogan."

"2016 continues it's apparent clean out of music legends.
Willie Moore and I are gonna be sad about this one though.
'Earth Wind and Fire' leader Maurice White has passed away.
There are no words to describe what a genius he was.
Sublime artistry has rarely reached such heights.
'75 to '79 they couldn't be touched. Along with Philip Bailey, and his brother Verdine, EWF raised the game forever.
Rest in Peace Maurice."

That's all the news for now!

The High Kings are currently back in the studio working on a new album, which HKHQ have announced in their latest newsletter will be released early summer if all goes to plan!

March sees them head back on tour in the US! Busy and exciting times ahead!

Thanks as always for your continued support.


Posted by Darren Holden Official at 16:02