Darren and Brian were in the studios of 4FM chatting and performing on the Guaranteed Irish show to promote the forthcoming High Kings Irish Winter Tour. They did a great interview, talking about the tour and their forthcoming Young Voices tour in the UK. They performed a medley of their big ballads from the show, Town I Loved So Well and Rare Old Times as well as Leaving of Liverpool.

But, these weren't the only treats they had in store. They also gave as a wonderful first ever performance of their own Holden/Dunphy composition 'High' as a taster of the original music they have been working on for the new show. The song got a huge reaction both in the studio and with the fans online.

You can listen to the full half hour interview and performances, including the new song, on the  latest news page of Darren's Official Website.

A little video blog from Darren

A few words from the studios of 4FM a few minutes before they went on air to preview the new song!

Darren and Brian hard at work inside the The Egg at Albany as they get busy writing their brand new song 'High' played live for the first time in the studio at 4FM. 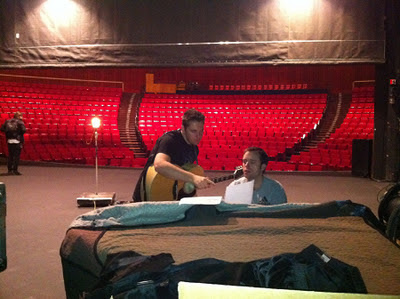 We hope you have enjoyed listening to Darren and Brian's interview and in studio performance. Please drop by Darren's official Facebook page and let us know what you think of 'High'.

Darren's Official Facebook
The High Kings Irish Tour kicks of in Wexford on Friday night where they will be starting to take the new show with more original songs on the road. Catch a show on the tour if you can, you won't be disappointed.

Back with news from the tour soon.

Posted by Darren Holden Official at 20:49