Darren performed 1300 shows as Pianoman in Movin' Out, for the most part in the USA and Canada. But one of the highlights was taking the tour to Japan for a 6 week run from 27 July to 2 September 2006. They performed to great reviews and enthusiastic audiences at the Tokyo Koseinenkin Kaikan throughout.

"Darren Holden truly holds Movin' Out together and pumps out song after song with great passion. He's not imitating Joel, he's a star in his own right. He's sexy, breathy and really rocks."
-Amy Matsuoka, The Daily Yomiuri , Tokyo August 2, 2006
This photo slide has a full cast and crew photo from opening night, photos from the show, as well as some other personal performances from Darren with some of the Movin' Out band at Shinjunku station and Crawdaddy's Bar.


Darren, along with other members of the Movin' Out cast, were interviewed for a Japanese television station.
We have just added two videos of unseen footage of Darren's two interviews. Please note that these were actually filmed in Boston.
The first video shows Darren at the theatre with an opportunity to see him back stage and climbing his 30ft ladder to his piano up on the platform above the stage! The second interview is a rare opportunity to see Darren relaxing with his wife Michelle and their young son Josh, who were with him throughout the tour.
Screenshots from the videos

Darren's solo album Roadworks was released while he was in Japan and received an amazing reaction from the Japanese fans, selling over 20,000 copies. Here he is with a group of fans happy to have met Darren and got their copies signed! 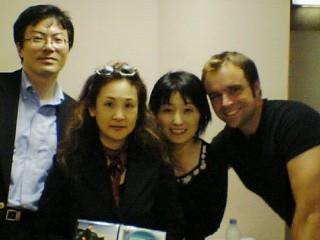 We hope you have enjoyed sharing Darren's experiences of Japan in what was a very special and memorable time in his career.
STOP PRESS!!!!!!

The High Kings have just announced US festival dates!


Darren is about to head of back to the UK with the High Kings to rejoin the Young Voices tour at the MEN Arena in Manchester.
Thanks for your continued support
Darren and the DH Team
Posted by Darren Holden Official at 20:23