The Gathering, Up for the Match, Friendship Ball

"Day 2 of of 3 day recording session done here in Galway. Really getting excited now about the new High Kings album. So much happening and the material sounds really great, and different!

In other news, I will be doing a live phone interview on KCLR FM this Saturday at 1.25pm with my buddy, and mentalist extraordinaire Keith Barry, who is the guest dj for the 12-2pm show. Should be fun.

On Saturday night at 9.55pm on RTE 1, The High Kings will be appearing on "Up For The Match" to celebrate the eve of The All Ireland Football Final.

Then on Monday, I will be doing a live phone chat with Sue Nunn on KCLR FM at 11.20am, to talk about my role as an ambassador for Kilkenny to kickstart "The Gathering" 2013!!

As most of you will have heard, next year is a major national event dedicated to bringing our Irish abroad, home to celebrate everything about our heritage. So please come along at 7pm next Monday, Sept 24th to The Newpark Hotel Kilkenny where Brian Cody and myself will interact with the public to hear and put the best ideas forward for next years proceedings.

I would like to deeply thank The Gathering committee from Kilkenny for approaching me to be a part of this very special year long event."
Sunshine between takes in Galway 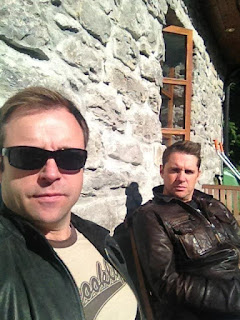 Up For The Match


The High Kings were honoured to be asked to both open and close the RTE 1 Up for the Match Programe on Saturday night. They opened the show with Step It Out Mary, and played out at the end with the very appropriate Rocky Road to Dublin. The programe was a celebration on the eve of the All Ireland Football final at Croke Park between Donegal and Mayo.

You can watch a few words from Darren from the soundcheck at RTE, and both their performances, on the videos below.

Darren is proud to have been asked to be an ambassador for his county along side Brian Cody, the manager of his beloved Kilkenny Cats.

You can read a Kilkenny People article about Kilkenny's plans for The Gathering Ireland 2013, including Darren's involvement, on the link below. 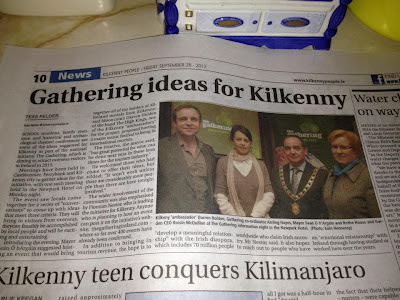 "Had a great time back home in Kilkenny last night. I am honoured and proud to be an ambassador for Kilkenny for The Gathering 2013. It promises to be a fantastic year not only for KK but Ireland. There were some great idea's offered for event's in the city and county that will need organizing soon. I have one in the pipeline that will require a huge effort so stay tuned for details.
Huge thanks to Mayor Seán Ó HArgáin for the very nice introduction that he gave me.
It really was a great moment."

We will of course bring you more news about Darren's role as ambassador, and the The Gathering Ireland 2013 plans for Kilkenny, once the planning of events gets underway.

"Tomorrow night we play a very special show at The Grosvenor Hotel in London in aid of Our Lady's Children's hospital and Great Ormonde St Hospital.
We close out the gala event that will also include Alexandra Burke and the legendary Bryan Ferry from Roxy Music."

"About to head back to the Grosvenor Hotel for tonights event. We close the show and share the bill with Alexandra Burke and Bryan Ferry. Plus there is a very famous guitarist from the worlds biggest band in attendance!"

"Chatted to The Edge after he duetted with Bryan Ferry on Carrickfergus and just before our slot at The Friendship ball in London. Amazing night!" 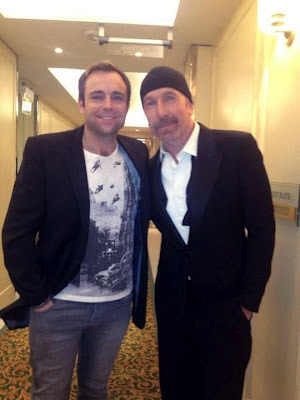 "Thanks to everyone in Athy for a great night tonight. Stormer from start to finish.
Finally we are off the road for a while and wrapping up the busiest summer since we launched. Very grateful to everyone who came to all the concerts and festivals. Next week we spend more time on the new album which we can't wait for you to hear!"

Cat That Got The Cream!

"Heading to Croker in a bit to see 2 great teams go at it for the 3rd time this year. Hopefully this evening we will be victorious. COME ON THE CATS!!!"

"The greatest hurling team of all time just got greater. Epic. Stunning. Unreal. Legendary cats.
So totally proud. All Ireland champs 2 years in a row!! Yessssssssss!!!!!!!
Might teach Joe to be quiet from now on! : )" 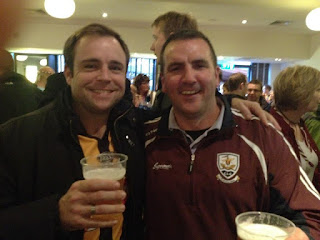 "Omg. A bus load of KK fans just screamed out ' Go on The High Kings' outside Trinity College. What an amazing day!!"


That's all the news for now.

Dates for the tour will be posted just as soon as they are confirmed on the official High Kings website.

As always, thanks for your continued support.

Posted by Darren Holden Official at 19:23