We have added two original Christmas songs, written by Darren and Bryan Steele, to SoundCloud. We hope you enjoy them.

Listen to Darren chatting to Paul Sheridan and Donal Sheerin at TCR FM in Tramore ahead of the High Kings show in Waterford.
The 15 minute interview follows Darren's song 'What Could Have Been'.

Listen to Darren chatting with his friend, singer/songwriter, and DJ, Marc Roberts on Galway Bay FM

A photo of Darren and Marc together from March 1997, when Marc pipped him to the post in Song for Ireland. 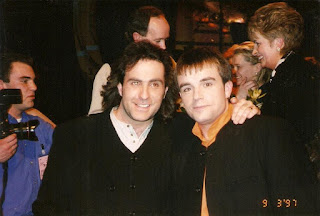 “Delighted to announce that yours truly will be the official after show party entertainment for The Skyfall premiere.“

“This was left on my piano for me. Sweet.” 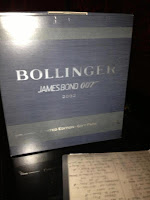 “We might be a month late, but just saw Skyfall. Wow!
Well worth the wait. Incredible!!”


Catching Up with a Friend! 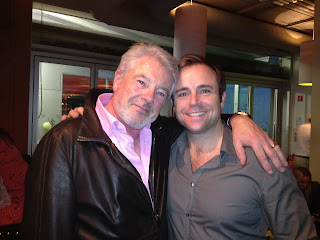 “I am rocking out tonight with a loony bunch of mo-fo's that are the cast and crew of the upcoming mammoth tv series The Vikings. Best fun I've had in ages in Lillies”

“On route to Lillies library to play a private Xmas party at 10pm
Fffffffffrrrrrrreeeeeezzzzzzziiiin!!”

“Looking forward to meeting the wife and heading to the launch of the new Level 5 with Mary Byrne ISPCC Christmas single tonight. Should be fun!” 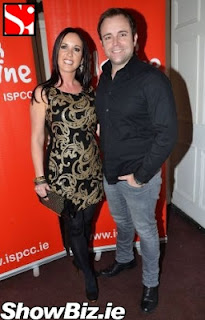 
'What About Me' - Richie Hayes Album Launch

" ‘What About Me’ The new album from the star of "The Voice of Ireland" Richie Hayes......is released and available in shops today and will be on iTunes early next week.
I am delighted to say that Richie has recorded 2 songs that I co wrote for the album.

“Sound checked and ready to go with Richie Hayes album launch tonight at The Theatre Royal Waterford. Brian and I will join him for a few songs during the show and my good friend Paul Farrell will no doubt have them rolling with laughter during his comedy slot! Should be a good night.” 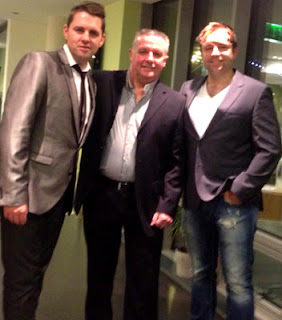 Myself, Brian and Paul Farrell

“Had great time last night back on home territory at Richie's album launch. The guy is so talented!! An absolute all rounder with a huge voice.
Loved catching up with everyone and really enjoyed the fun while singing with Richie and Brian!
Paul as expected floored them! We had a great catch up.
If you haven't done so already. Pick up Richies new album "What about Me"
Great stuff.”

Darren's official website darrenholden.net was launched on Christmas Eve 2010. We will be two years old this year and have had over 110,000 hits. Thank you all for the support, we hope you enjoy visiting the site which covers latest news and archives from all aspects of Darren's career both solo and with the High Kings. 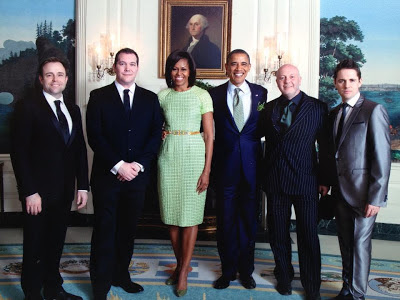 “About to head to Galway for what may be the final recording session for the new album, due to be released in February. I am wearing Black and Amber. Good or bad idea? : )” 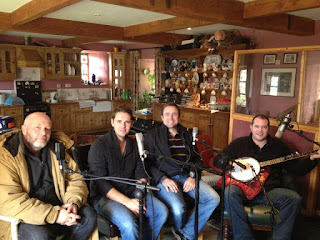 “Spent the evening listening to the first mixes of the brand new High Kings album. : )” 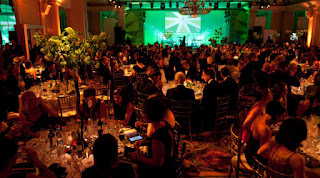 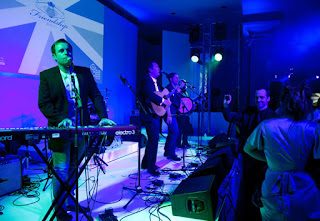 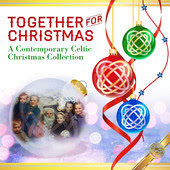 Anita Daly of Daly Communications, the premier Irish and Celtic entertainment promotion company in the US, has put together a magnificent, eclectic selection of yuletide cheer featuring original Christmas songs and standards titled: “Together For Christmas: A Contemporary Celtic Christmas Collection”.

The tracklist includes 'DRIVING HOME FOR CHRISTMAS by THE HIGH KINGS

Anita Daly says, “This album is a labor of love that I have wanted to do for a long time, it not only represents the best in contemporary Irish/Celtic music, musicians and song writing but some of the amazing artists that have been on my roster and I am so proud to have worked with these past 17 years.”

“Tonight at 8pm The High Kings return to The Cork Opera House. Really looking forward to seeing you all there”

“Cork! Thank you for an amazing night and welcome! We loved it. See you soon.” 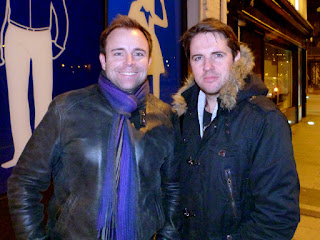 “The High Kings are almost sold out tonight for our show at The County Arms in Birr. Grab the last few tickets while you can. Local legend Mark Boylan will be opening for us!!”

“Thank you Birr! Great night.
On the road home!”

“On route to The Strand Theatre in Carrick on Suir for an 8pm show. if we don;t freeze first that is!! Yikes...brrrrrrr”

“Heading to The University Concert Hall this evening for an 8.30pm High Kings show! Always a great crowd for us. Who's coming???”

“Limerick!!
Unreal night. Fantastic crowd! Thanks so much for a brilliant time. See you all in 2013.”

“Heading homeward later this afternoon to play The Theatre Royal in Waterford. We are onstage at 8pm.” 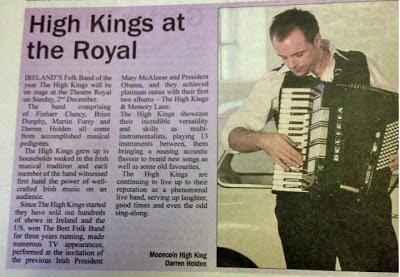 “Waterford!! What can I say !
The best show ever at the Theatre Royal. Full house and boy was it loud! Great to see all the Mooncoin gang afterwards. Thanks to everyone for coming out to see us.”

A nice review of the Waterford show from Socialbridge

“Tullamore thanks for a fantastic night! Loved it. Brilliant vibe.”

“Now that was fun!! Dunphy and I gave it loads today in Ashbourne. Great crowd and loadsa laughs.
On to Mullingar soon for a 10pm HK show!”

“On the Road Again. Tonight The High Kings are live in concert at The Market Square Theatre, Armagh. Onstage around 8pm.”

“Grabbing some lunch soon, strolling around Armagh in the drizzle and then on to Strabane for tonight's show at 8pm.
Tomorrow at 12.30pm I will be chatting over to phone to Marc Roberts on Galway Bay FM.”

“Absolutely brilliant night in Strabane. Best audience probably all year. Great fun.
However I am totally heartbroken at the news coming out of America about yet another senseless shooting spree. Innocent little children who were most likely excited about Santa and Christmas.
RIP beautiful children and adults who have been lost.”

"We've played the INEC many times. Tonight was one of the best nights here. Huge crowd and an amazing vibe. Just had the best laugh with the fantastic James Cramer who was out special guest tonight. Just one extra word on tonight. I always dedicate "Fields of Glory" to the football or hurling teams of whatever county we are performing in. Tonight I dedicated it to Paudi O' Shea and the entire audience rose and applauded him. Truly touching."

"Unbelievable. We are LEGO!!"

A few other bits of news and status updates

“50 years ago today a record was released by a new group from Liverpool. It was called 'Love Me Do' You know the rest.”

“Sending heartfelt and deepest sympathy tonight to our dear friends Dearbhla Fay and Fergal on the passing of their beloved dad, and The Chieftains legend, Martin Fay.
Another Irish music legend joining the session in the sky.
RIP Martin.”

“Sending prayers and best wishes to all my East Coast US family. Hoping that Sandy isn't as catastrophic as feared.”

“Thinking of you all in NYC, the Jersey shore and all along the east coast tonight. It's about to get ugly so please stay safe.”

“My dear friend Ken has made it to base camp Mt Everest!!
All in aid of Our Lady's children's hospital.
Here he is at the top with his High Kings tee shirt!
So totally proud of you bud.” 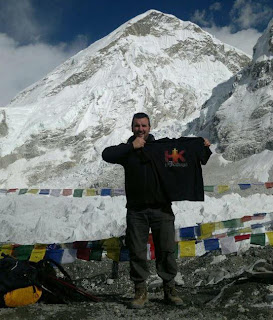 "RIP Paudi O' Shea . Kerry and the GAA world have lost a true original and a legend."


That's all the news and updates for 2012! We'll be back in the new year with all the news from Darren and the High Kings, including all the news on the brand new High Kings album due for release the first week in March.


We wish you all a Merry Christmas and Happy New Year.

Thank you all for your continued support.

Posted by Darren Holden Official at 21:07