May News Round Up

It's that time again when we pull together all the news, photos, videos etc from the last few weeks so you can catch up on anything you may have missed.

Where possible, we will always answer any questions left on Darren's various social media sites. However, Darren and the team are unable to comment about the new High Kings album and future tour dates until details are confirmed by the official channels for public release. Please be assured that we want to share all information with you as soon as we are able.

Thank you for your patience!

“Just did very cool interview with Cahir O' Doherty from The Irish Voice newspaper in New York.
Should be on the shelves in the coming weeks.”

“On the shelves today in the USA and online.
Irish Voice Interview promoting the Kilkenny Gathering Initiative. Also reliving performing Movin' Out in New York and being a High King.” 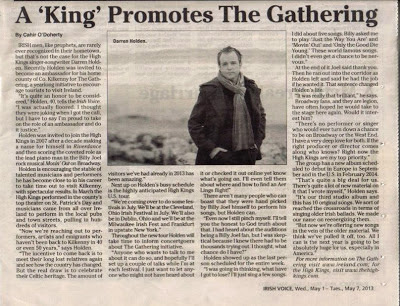 Listen to Darren chatting to Miriam O'Callaghan on RTE Radio about his recent experience of being a victim of 'road rage'. 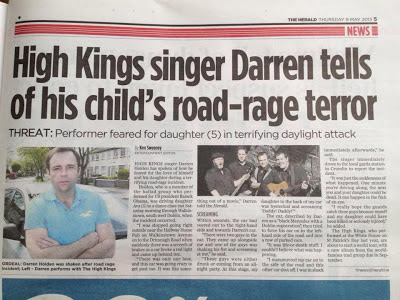 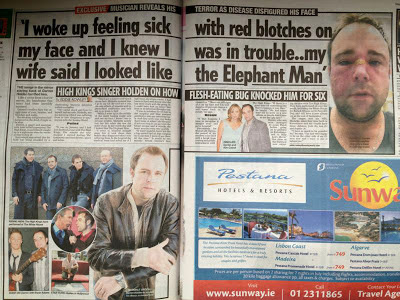 “First scene of the day. Daddy in his SUV.” 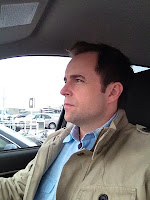 “Another day, another video shoot. : )
Off to Dublin Airport to continue work on the new advertisement campaign for DAA set to launch in the next few weeks.
Lights, camera, action!”

“Cover of Daily Mail magazine. Jeez, me nippers are famous!!” 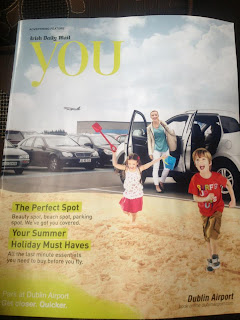 
We have another of Darren's original unreleased studio songs to his Soundcloud. You can listen to 'Savor the Wine' and previous songs on this player.

“Just got this pic sent to me from the USA.
Take during Oscars week 2006 at the US Ireland Alliance event in Los Angeles. I performed a solo set celebrating the Irish in Hollywood.”

“Found this during my continuing clean out. Bonnie Tyler and myself taken backstage in Moscow October 1994 after the final show that I opened for her. Great tour which also included Paul Young.” 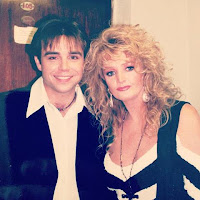 Some of you may remember that Darren undertook a charity skydive on 19th June 2010 for the Bubblegum Club in Kilkenny. This was in association with Tandem SkyDive Club and raised 11,500 Euros on the day. We are pleased to now be able to share his jump with you!

“Hey folks. Don't forget to tune into KCLR 96FM on this Easter Sunday evening at 7pm where I will be the guest DJ spinning my favourite tracks for 1 hour!
I can promise you that there will he a never before heard exclusive track from the upcoming new High Kings studio album!!” 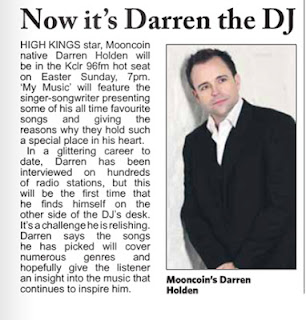 CLICK HERE to read online version
We have recorded Darren's hour long 'My Music' programme, with a guest appearance from his young son Josh, and you can listen with an option to download on the links below. Darren did as promised play an original exclusive track 'Oh Maggie' from the new High Kings album  but as it hasn't yet been released, it has been removed from this recording.

LISTEN TO MY MUSIC PART 1

LISTEN TO MY MUSIC PART 2

“I will be chatting to John Masterson on KCLR FM today at approximately 1.10pm about tonight's Eurovision Song Contest.
On that note, I would like to wish Ryan Dolan and crew, and also my old touring friend Bonnie Tyler the very best of luck for the competition.
I won't see it as The High Kings are at the Greville Arms Hotel in Mullingar tonight at 9pm.”

“Just played a very rewarding and cool show for the students of my kids school to celebrate the end of Irish week and St Patricks Day. Amazing to hear 250 children sing along with me to The fields of Athenry, knowing every word.
Josh and Ava are so lucky to have teachers who instill Irish pride through music in them.
On route now to RTE for sound check as tonight The High Kings are on The Late Late Show!!
Also will be on KCLR FM chatting to John Keane around 3.30pm.”

"Just met up with old Riverdance friends Padraig and Niamh who are also on tonight's show." 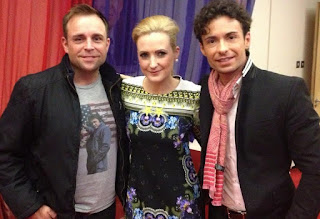 "This time tomorrow the lads and I will be on route to Upstate New York to play a date at The Villa Roma resort in the Catskills. Should be fun. Also, will be nice to leave this dreary dull and cold Irish weather behind for the weekend! I may even sneak a trip to NYC to satisfy my constant craving."

“Just arrived in Villa Roma, outside Bethel NY after a 3 hour journey from Newark. There is a serious "Kellerman's" and "Nobody puts baby in the corner" vibe here which is kinda cool and different. Already having major craic (ie: fun) with The Willoughby Brothers and this should be a great weekend.
We are performing on Saturday night so tomorrow is free to hang out and do stuff that you do at resorts in the country.
Gotta run.....Salsa starts in 10 minutes!” 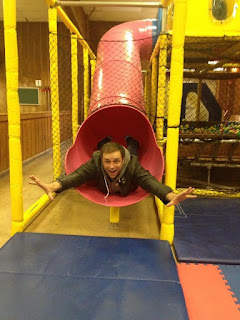 “Just saw TheWilloughby Brothers live in concert and I can safely say, they are all that and more!
Fantastic performance that showcased 6 great voices. Magic.
I actually got a lump in my throat when they sang "The Promise" which I co-wrote with Marc Roberts for them.
The sky's the limit for the lads and I sincerely hope they reap the rewards they deserve.
Go see them if you get the chance.”

“Thanks to everyone who came to see us tonight in NY State.
Really cool crowd including a lot of HK followers that travelled a long way to see us! Thanks guys!!”

“Just sang and played at mass this morning with Brian Dunphy, Des Willoughby and Mary Darcy. Really nice way to start Sunday. Heading to Newark for our return flight in a few hours.”

“Back on Irish soil after a great weekend.”


“Tonight The High Kings kick off the weekend with a concert at The Heritage Hotel Portlaoise at 8pm, and tomorrow night we are at the INEC Killarney at 9.30pm.
Next week it is full on rehearsals in preparation for the album/tour and we should be able to announce details of a new major label international deal shortly.”

“Great night at The Heritage Hotel. Brilliant crowd that sang along all night and gave it loads!
On to Killarney tomorrow.”


“Always nice to see a huge line of folks waiting for doors to open. We are onstage tonight at 9.30pm and it should be a brilliant night.”

“Thanks Killarney for another great show at the INEC last night. Always a pleasure.
Homeward bound and gearing up for a week of getting the new songs ready for summer, and the new album release.”

“Kids dropped at school, gym done, now on to a full day of rehearsal in the country.”

“Wexford!! The best night in ages! Thanks to a huge crowd for a brilliant time!!”

“First workout of the week done. Ready to kick off week 2 of High Kings rehearsals.
This week we play Theatre Royal Waterford on Saturday and Salthill Hotel Galway on Sunday.”

“Rehearsals finished and now all that's left is to decide when to give the songs from the new album their first airing in a live setting.
Stand by for updates on that and a big announcement about the major label that has come on board to release the record.

Exciting times ahead for The High Kings.”

“Tonight The High Kings are live onstage at 8.15pm at The Theatre Royal Waterford. Always nice to have a gig close to home.”

“As always Waterford was fantastic! Great night, brilliant crowd. Way too much fun.
On to Galway.”

“Absolutely brilliant Galway crowd. What a night! Loved it.
Great atmosphere! Also what a moment to have young Stephen
Reilly come on stage for the last song with his dad Michael.
What a courageous kid fighting a massive battle. Huge inspiration.
Onwards to Dublin and a day off.”

A few words from Darren (and Brian) in Mullingar before the show.

“Holy moly Mullingar!!
Best crowd in ages! Fantastic atmosphere!! Loved it.
Thanks a million for a great night.”

The High Kings will headline 'Hooley in the Heather' at the Sliabh Beagh Hotel, Knockatallon Co. Monaghan on 14th June!


“Delighted to announce that The High Kings will play the main stage at This years Westport Music Festival on June 29th, along with Christy Moore, The Stunning, Gavin James, Julie Feeney and many more.”


That's all the news for now, we'll be back with more as soon as we have it. Please drop by Darren's official page on Facebook for daily updates.

Posted by Darren Holden Official at 21:08