Friends For Life and US Festival Round Up

Back from a very successful US Festival Tour, the High Kings now have exciting times ahead with the European release of their new studio album Friends For Life fast approaching and promotional tours getting underway in the UK and Germany. More dates to follow in Europe and the US for 2013-2014 as soon as they are confirmed.

Here we'll bring you up to date with all the latest news for Darren and the High Kings. 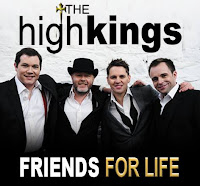 "Just received the mastered copy of The High Kings new album "Friends for Life" in the post. Can't wait for it to be released! You're gonna love it!
I hope!"

Pre-order the new High Kings album Friends for Life from Amazon UK with a release date of 23 September. Overseas shipping is available.

Please note a release date for the US is NOT yet available.

These are only a selection we have found via Google.

Other European countries, please check your music order sites for links.
The album will be available for download from iTunes stores in countries where it has been released on the release date. 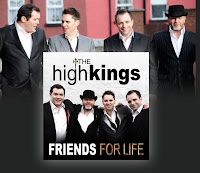 The High Kings UK and German Dates are announced!

“The High Kings next album is already in the works.
It's called "Friends for life, and beyond".” 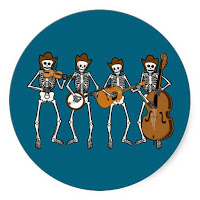 US Festival Round Up

“Great service all the way to Cleveland, USA from Dublin. Couldn't fault it. Oh yeah....maybe if the luggage and instruments had arrived , that would've been amazing. But the Delta staff here are great and they'll arrive tonight.”

“Met this Guitar Center employee, Dan Murphy who freakishly was listening to The High Kings on his way to work. 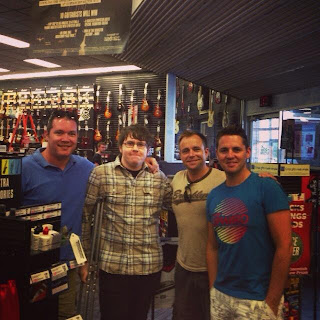 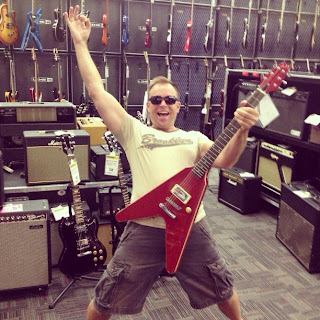 “Wow! Cleveland. You really do rock! What a crowd. Amazing. Y'all brung it! Loved tonight. Let's do it again tomorrow.”

“Todays show was packed with a great great crowd. Chilled, relaxed, breezy, fun, vibrant and very enjoyable. I'm loving that the new songs are being so well recieved and it's very exciting to hear the reaction to them when the album isn't even released yet! Thanks to everybody for the amazing response so far and tonight....lets get rowdy and even louder!”

“Cleveland you're killing us! Big thanks to a huge crowd that turned out today for the first show. Massive noise from you guys under a scorching hot and blue Ohio sky. Loved every second of it. So great to see so many people enjoying the new songs and pre-ordering the album.
Final show tonight at 8.45pm.”

“What an end to an amazing weekend in Cleveland. Loudest and biggest crowd tonight!
Thanks to everyone for a really great time!!”


“Long trip done! Ready to chill in the Empire State.”

“Just arrived in Utica, New York in advance of tonight and tomorrow nights shows at The Frankfort Festival. Lovely weather here but as always in this neck of the woods, that could change.
Fingers X for a sunny weekend!!” 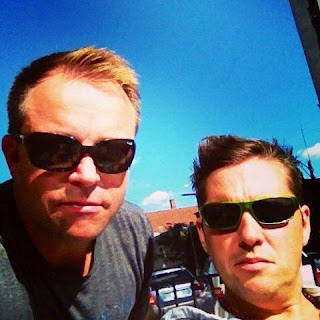 “Fantastic crowd tonight in Frankfort! Absolutely huge and damn loud too. The welcome we received was unreal and very appreciated. Great to see so many familiar faces in the crowd too, and we must look hungry or something as most came with gifts of food! Yummy
Roll on tomorrow!!!”

“Unreal crowd! Humongous audience and talk about loud!!
Wow. Thanks Frankfort for the amazing reaction this weekend. Loved it. Thanks again to those who brought gifts!! Totally blown away. I received the best cowboy shirt in the world from Lana Alexander tonight. It's so gonna be worn.
Road trip to Columbus Ohio tomorrow.” 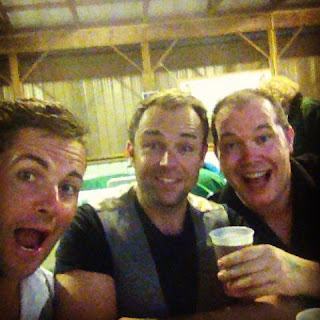 “After show beverages with his Clanciness” 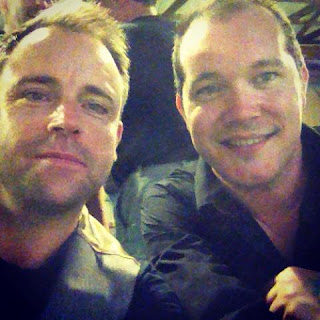 “About to set off on a 10 hour road trip to Ohio. I-pod charged and hotel pillow snuck out! Lol”

“14 hours later and we are finally in Ohio. Mammoth travel day but we had The Beatles, Elvis, Dylan, and co to keep us company.
Had a nice little BBQ at a friends house in Pittsburgh to break it up too.
Now.....beddy bye's time.”
A little ‘Chilling’ Time

“In cinema dining with reclining leather seats.....Now this is a movie experience.”

“As a horror movie fanatic I've seen hundreds of films down through the years, but The Conjuring is up there in my top 5 ever. Scared the bejaysus out of me. True story too which makes it even more daunting.
Absolutely brilliant.”

“A few words from Darren in Ohio.”

“Amazing first night here in Dublin Ohio. What a fantastic crowd! Wild and loud and totally into the show. Just how we like it. Hope everyone watching at home online enjoyed it just as much. Can't believe it's taken us so long to play this festival but we are making up for lost time this weekend. Great to se the HK Army out in force again this summer and once more....Thanks for all the gifts!!! See ya'll tomorrow.”

“Ready for round 2 Dublin Ohio?”

“What can I say about these crowds in Ohio! Just incredible noise and energy coming at us all the way through the show. It's hard to be a raucous Irish audience that are there to party. Tomorrow at 1-30pm we will hit it for the final time in a brief one hour show. See you all there and indeed online!”

“Great to see our Riverdance on Broadway buddy Matt Martin last night after the show in Dublin Ohio.” 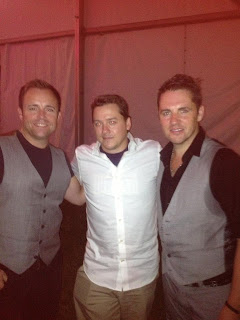 “Can't wait to hit the stage for the final time today in Dublin, Ohio. Kicking off a 1 hour set at 1.30pm. Don't forget you can stream the show live online again around the world.”

“What a way to sign off on an incredible weekend here at the Dublin Ohio festival. Almost moved to tears at the reaction to "Town". I love that song and I so appreciate that people get what I wanted to do with it. I am so chuffed that the new songs from the album are being so well received and it really makes the next 12 months very exciting for the group. Thanks again to a huge crowd for being so great and to all of you watching at home, especially my family and many more friends.”

“After tour drinks with Brian” 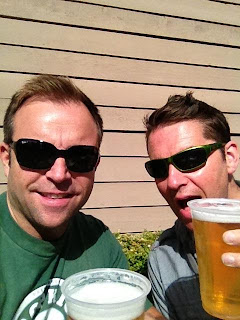 “Thanks Jetlag. A complete victory for you this time.
Long day ahead.....”

Back Home In Ireland

“Welcome to my cake stand” 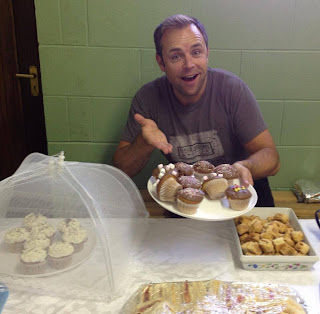 “Fantastic night in Lordship. So well looked after by the Club staff. Huge thanks to everybody. Great crowd. On the road home.”

“Derry Fleadh! Are you ready for The Kings?
Onstage at Da Vincis at 10pm tonight as part of an amazing week in Derry.”

“Tonight's show is almost a sellout so we may hit the stage a lot earlier than the scheduled 10pm. To those who have tickets, please get to the venue as early as possible.”

“Great night in Derry. Thanks to a brilliant crowd for turning up!
Just in the door after a long ass drive home. Had Brian, Johnny and Elvis to keep me awake the whole way.”

Other News and Updates from Darren 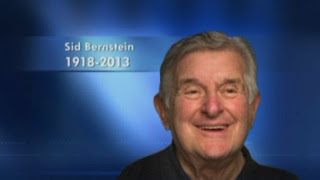 “My dear friend Sid Bernstein had left us for the big concert in the sky. I'll never forget him and all the invaluable advice he gave me. One of the true greats of our business and a total gent. He was so unique in his approach to life and never accepted the word 'no'.
One of my proudest moments was in 2006 when I saw an ad for my last solo concert in Nee York that began with ......Sid Berstein presents.......
God speed dear man.
No doubt he's already hooked up a meeting with John and George in preparation for the Ultimate Reunion. X”

“Huge congrats to our Riverdance family on setting a new world record for the longest line on the banks of the Liffey in Dublin. So proud of you all and always proud to have been a part of such a fantastic show.
Well done!!!!” 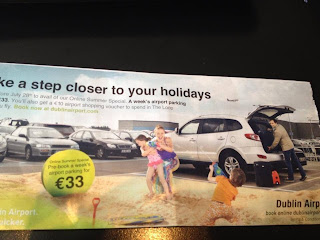 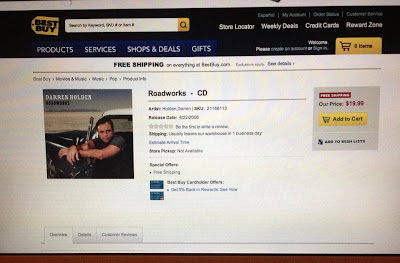 “Brian and I with Tupelo lead vocalist James Cramer in Norway. Good times.” 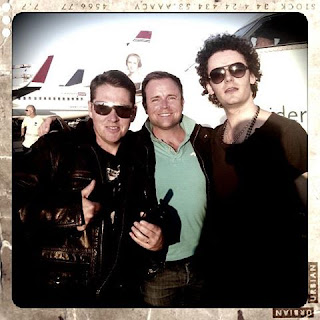 “Spent today in my agents office sorting out old 'Movin' Out' press material. Amongst the hundreds if newspaper clippings we found this little quote from Billy” Joel." 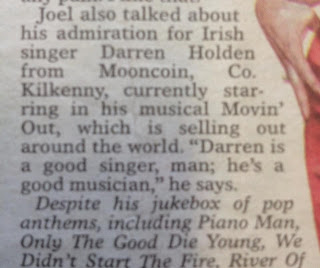 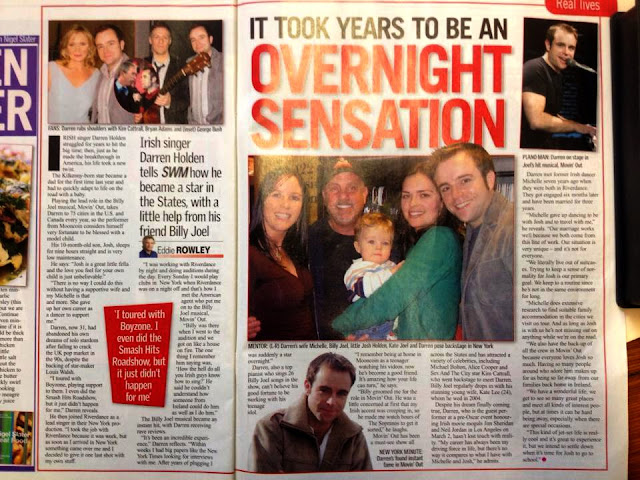 "Hanging out with an old friend" 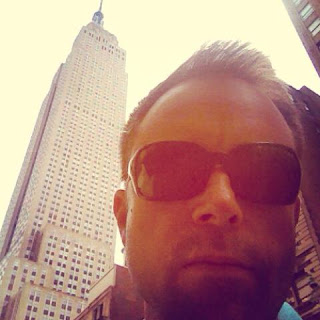 “Farewell NYC. You never let me down.”


“What I wouldn't give to be home in Kilkenny for the next few days! The Boss on home turf! Have a great show Barry Danielian and Nils Lofgren. You're on Holy ground.”

“Just back from a lovely day spent in Bray, including a family hike up Bray Head. Stunning views and sunshine. Good times”
Darren in X Music Dublin 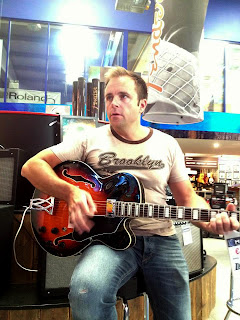 “Totally moved seeing Christy Dignam on Miriam show. What a warrior. I hope to god he wins his battle and is 100% well again soon. We need his voice, talent and most importantly his honesty.”

“Tonight I watched my little boy score his first hat trick at soccer. He even beat 3 players on his way to scoring the third. He took tackles and got up, lost the ball, went after it and won it back and never stopped trying. I couldn't be prouder. : )”

“What has happened in Syria is beyond comprehension . If there is a hell, I'm certain the monstrous scum responsible would be refused entry.
Lost for words at some of the horrendous footage.
RIP to all those poor innocents lost.
Wake up world and do something now!!!”

That's all the news from Darren and the High Kings for now. We hope you have enjoyed catching up with anything you might have missed over the last for weeks.

There's exciting times ahead for Darren and the High Kings as they look forward to the release of the new album and getting back out on the road!

As always thank you for your continued support!

Posted by Darren Holden Official at 23:33