This September marked the 10th Anniversary of the opening night of Movin' Out at the Pantages Theater in LA. Billy Joel was at the opening and joined Darren on the platform after the shows. Here is Darren performing New York State of Mind at the end of the show, and then accompanying Billy on guitar while he performs Only The Good Die Young.
Another video of Darren performing in the show. 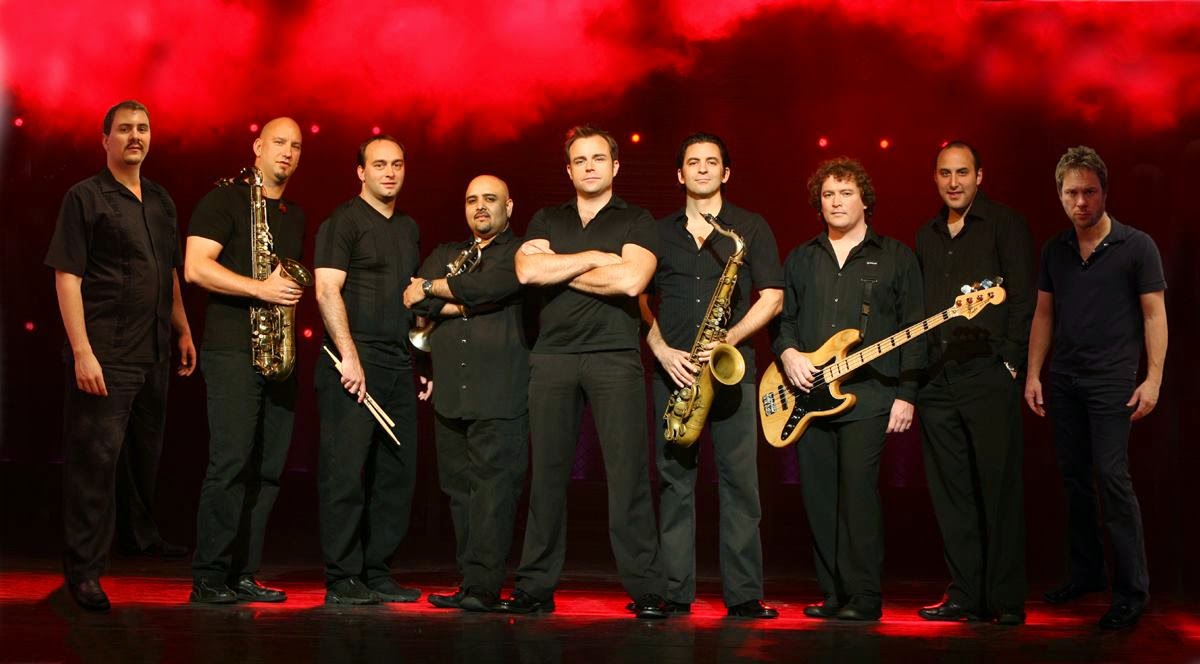 "South East Radio listeners, I will be chatting to Alan Corcoran at around 11.45am this morning in advance of our almost sold out concert in Enniscorthy on Thursday next Sept 11th."

CLICK HERE to listen to a recording of the interview

Update from HK HQ: - "Just about to arrive at RTE Cork for 'The Today Show' on RTE 1 Television - we will be talking about our roles as Ambassadors to the 'Trad for Trocaire' campaign, we urge everyone to get involved no matter how big or how small the event is . . . .big announcement from us coming too . . .and a song of course!! Don't forget to watch - 4.30pm on RTE 1 TV . . ." The High Kings on RTE 1's Today show with Dáithí Ó Sé and Maura Derrane. There's an Interview with Darren and Brian promoting their involvement with Trad for Trocaire and a performance of Go Lassie Go to close the show. 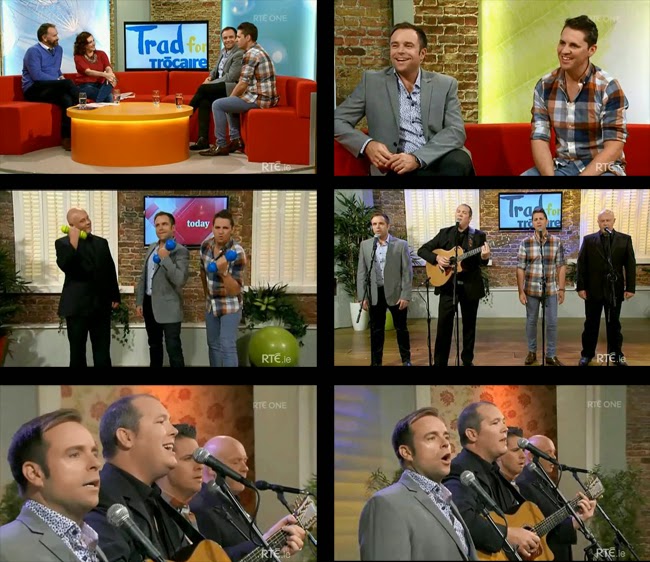 "On route to Croker for The All Ireland.
Come on The Cats!!"

"Me nerves are gone! What a game. Thought we had it with 10 mins to go but fair play to Tipp they never gave in. 2 great teams. Some very suspect decisions though but sure Barry Kelly just keeping to form.
I will miss the replay this year but I'm sure me nerves will be equally shot, watching online.
Congrats to both KK and Tipp.
Mammoth entertainment."

"Absolutely delighted to be performing with the lads before the Kilkenny v Tipperary All Ireland hurling final replay this Saturday afternoon.
I would love to see every Kilkenny flag waving and hear everyone singing when we get to "The Rose of Mooncoin"!!
Should be a great craic, and we are honoured to once again be asked to perform at such a massive event.
The only bad thing is......once we sing we need to leave, so we won't get to see the game!"

"Ready for Croker!
Can't wait to perform once again on All Ireland Final Day, especially with The Cats involved.
We kick off at 3.55pm until 4.25pm.
Bring your voices and get as loud as you can.
Should be great fun." 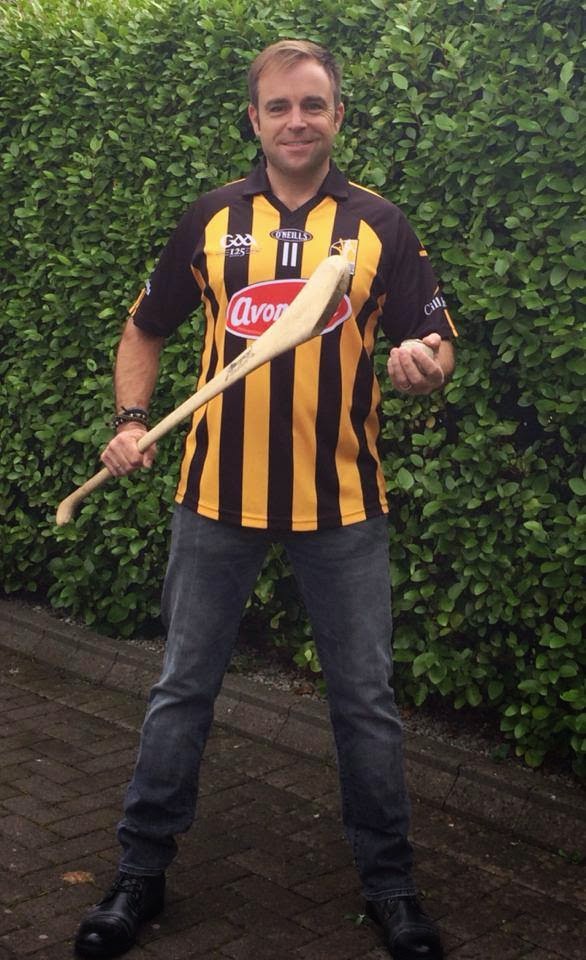 A few words from Darren (and Finbarr!) before they performed on the pitch at Croke Park.
"Myself and Brian with RTE presenter Dáithí Ó Sé at Croke Park" 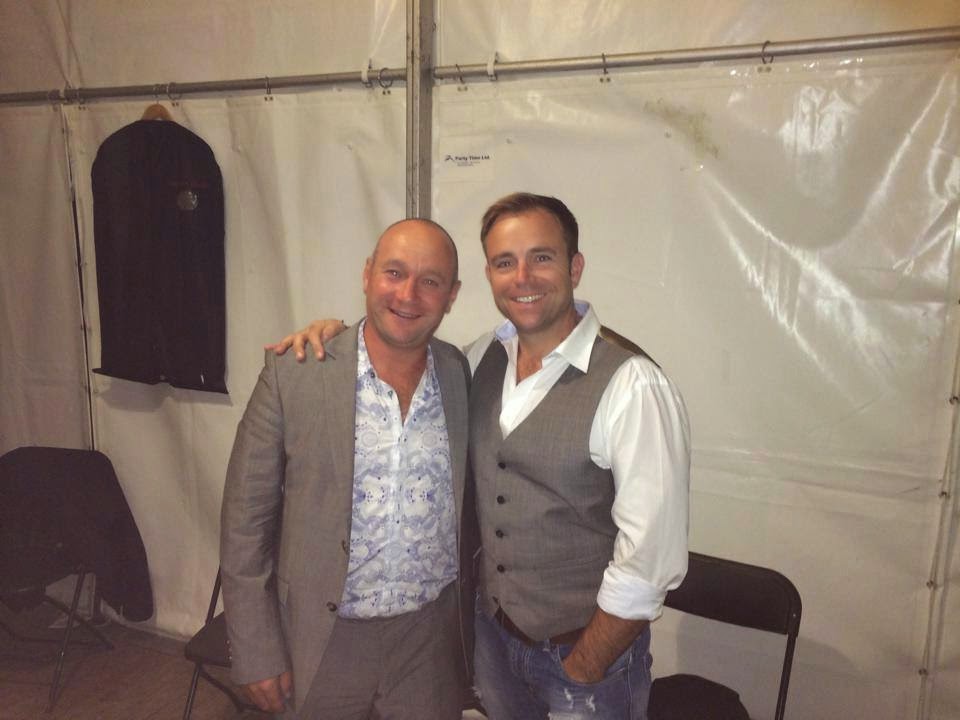 You can watch Darren singing Rose of Mooncoin with the High Kings on the pitch at Croke Park on his Facebook page. They were performing a set ahead of the All Ireland SHC final replay between Kilkenny and Tipperary. Video courtesy of the Holden family. 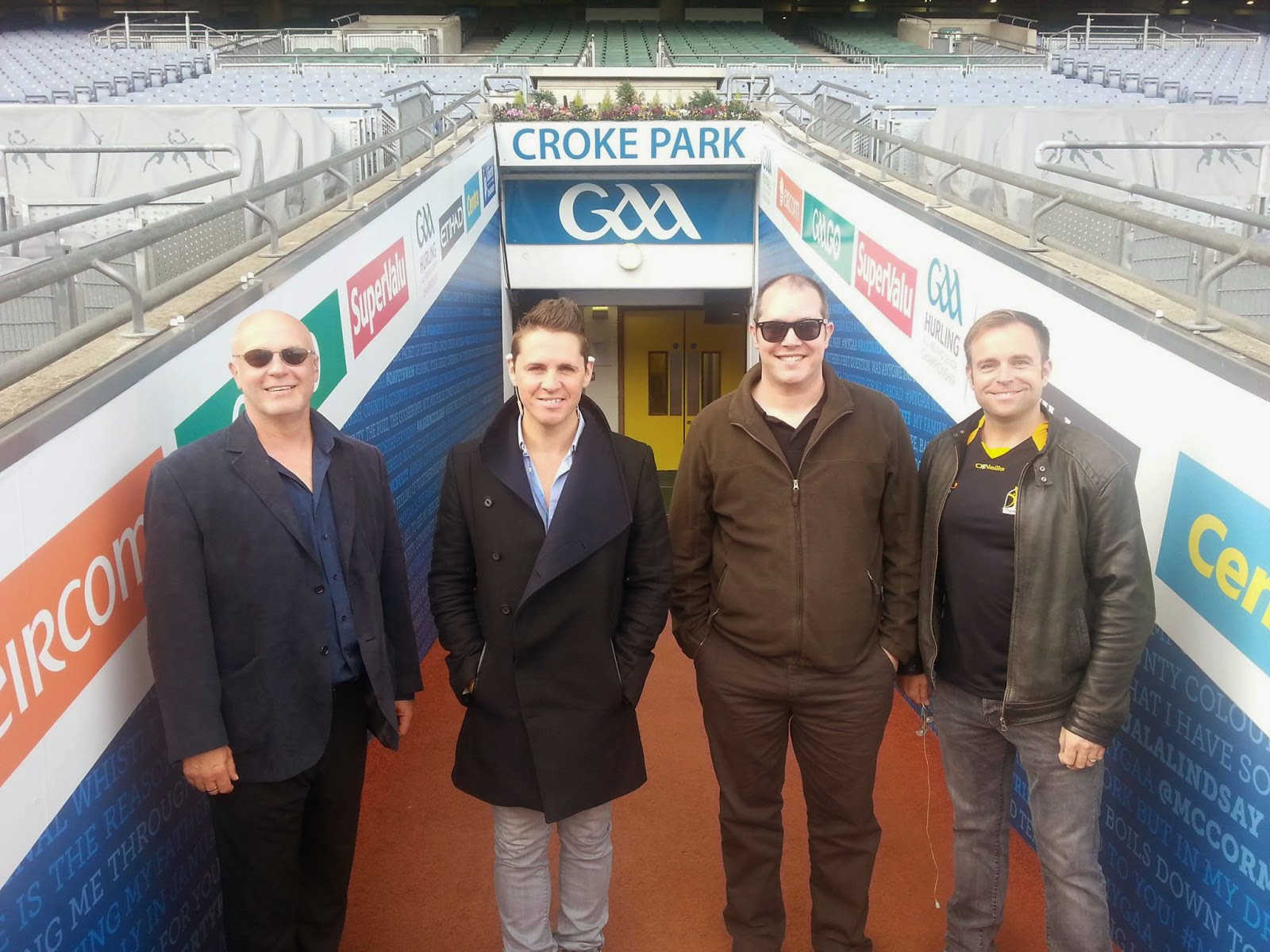 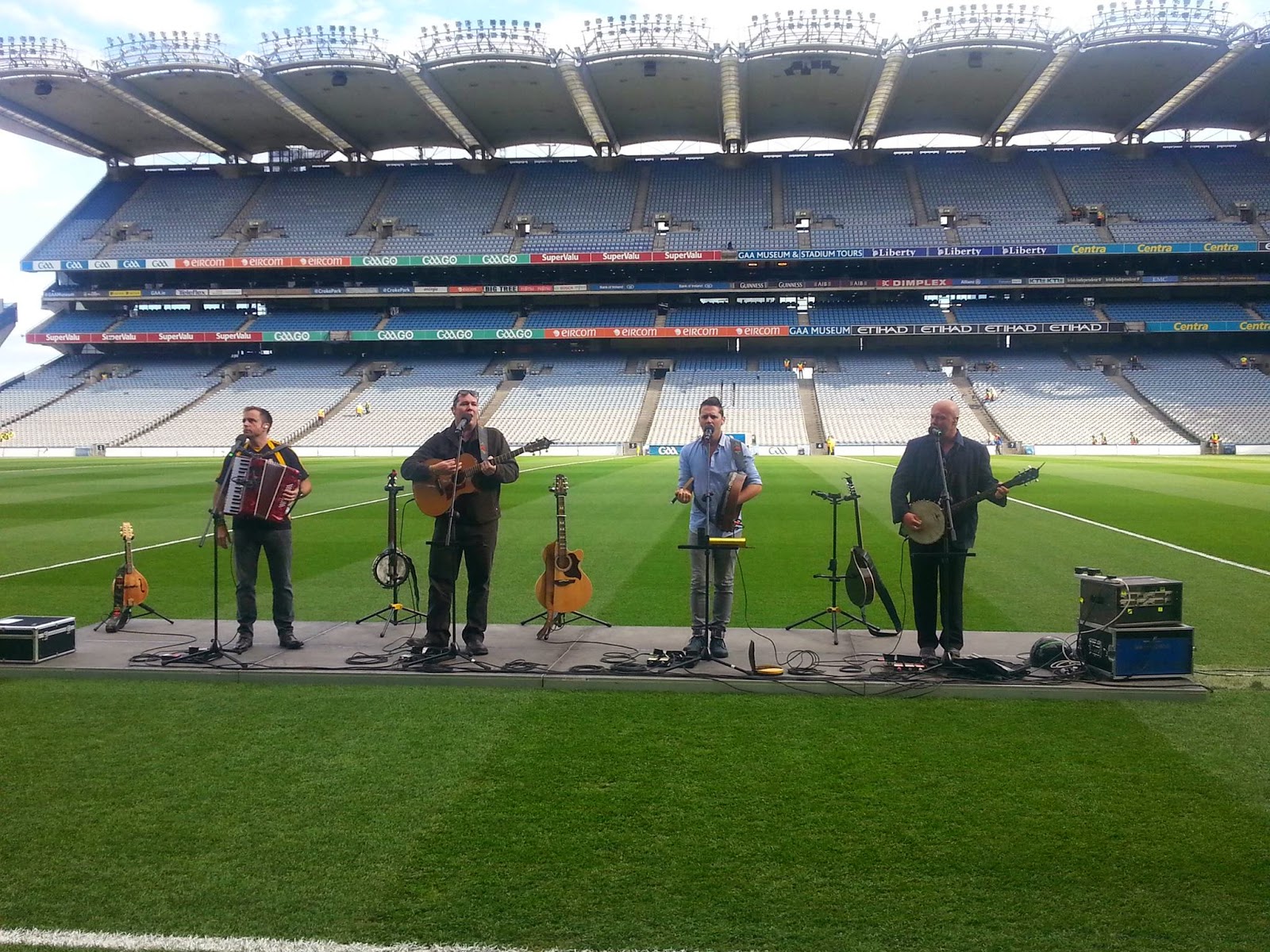 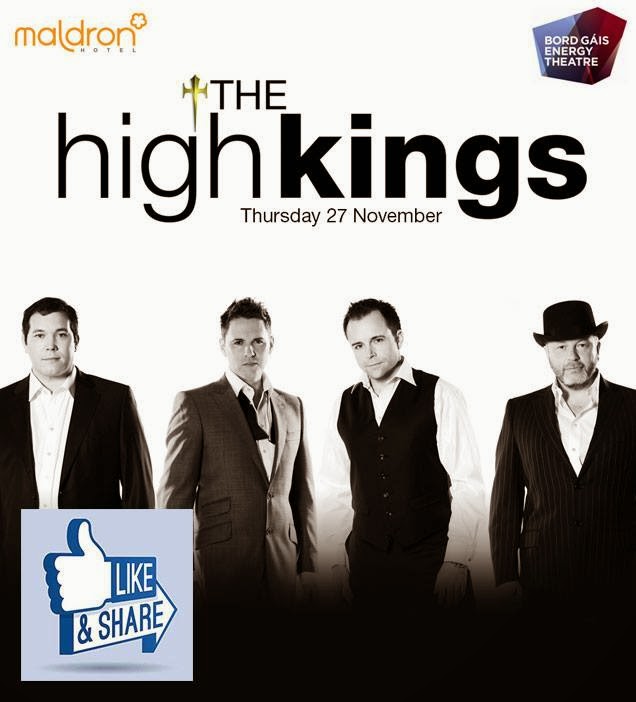 Exciting Facebook competition announced for the Dublin show at the Bord Gais Entergy Theatre in November!

**COMPETITION TIME **
Just like and share the image below to win the chance of the ULTIMATE HIGH KINGS PRIZE PACKAGE!
1. Four premium tickets for the opening show of the High Kings Irish Tour in Bord Gais Energy Theatre, Dublin on Thursday 27th November.
2. Overnight hotel accommodation and dinner for four at the Maldron Hotel Cardiff Lane, just beside the Bord Gais Energy Theatre.
3. Meet and Greet with the High Kings after the show.
4. A premium gift package of all High Kings CD's/DVD signed by the band.

For show details and to purchase tickets CLICK HERE

Each week we will pick out one lucky winner who will win TWO PREMIUM TICKETS to the show on November 27th, the overall winner of THE HIGH KINGS PRIZE PACKAGE will be chosen on Friday 21st November. All you need to do is like and share the picture below!!! Good luck everyone!!!!

Tour dates have been announced for Germany and UK in 2015, as well as dates for the long awaited Irish Winter Tour! CLICK HERE for full list of dates, venues and ticket links. 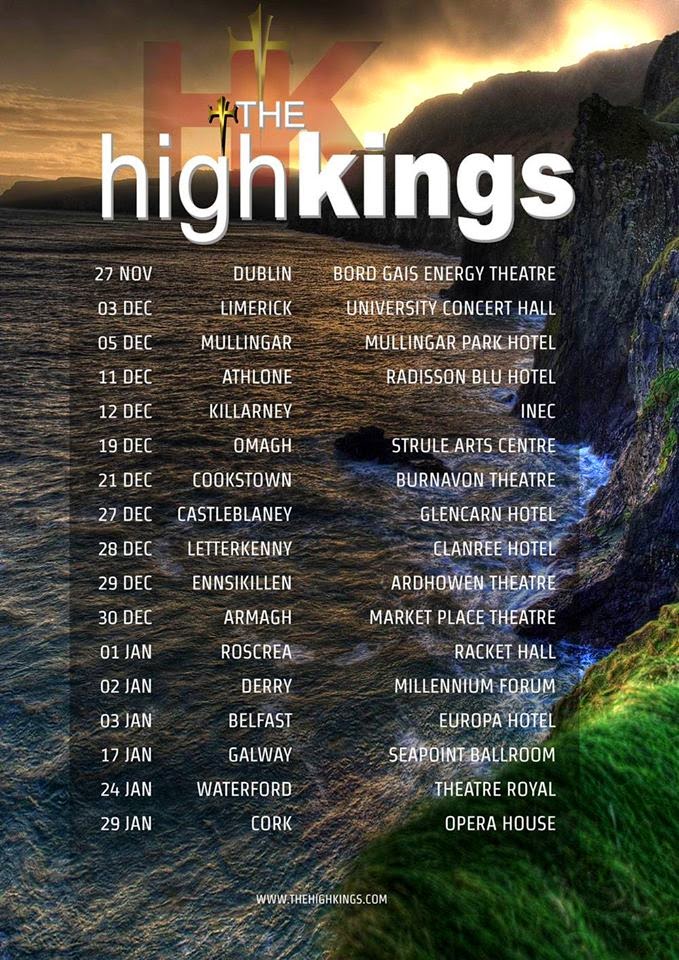 Irish Show Round Up

"Thanks to a great Sligo crowd tonight at The Fleadh. Brilliant fun. Wild atmosphere. Nice to see one of Country music's finest talents John Mcnicholl there."

"Thanks to a huge crowd at Bannagher College last night. Incredible turnout and brilliant night. Lovely to see my family rockin' in the front row all night, and to get Josh up onstage for the finale for his first time!
Thanks to Ken Lucas, Jared Marc O'Maidín, Sean Corrigans Bar and co for taking care of us so well as always!!"

"Thanks INEC Killarney for a truly great night. Huge crowd yet again and brilliant atmosphere. Had the pleasure of our 5th member, the now very grown up Adam O' Sullivan join on stage yet again for the finale. Great to see the rest of the O'Sullivan family too!"

"The line of people waiting to get into tonight's concert in Enniscorthy is massive. Always a great sign.
Nice to be back in Nanny Holden's turf. Should be a good night."

"Enniscorthy. What a night. What a crowd. One to remember. Thanks to everyone who came out to see us. Massive."

"What a way to wrap up our summer tour tonight in Newcastle West.
8,000 of the loudest people we've heard in quite a while. Crazy night. Loved every second of it.
Amazing finale to a great festival."

"One of the best audiences we have played to. Thanks so much to everyone who came out to see us tonight." 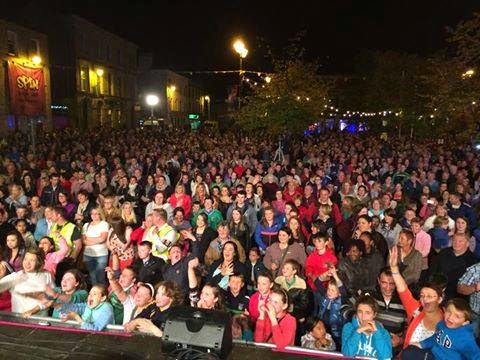 "Great to see my old friend Alan Shortt last night in Newcastle West. Alan did an brilliant job as always as MC and introduced us onstage."

"Here it is - the High Kings Ice Bucket Challenge!! Please like and more importantly SHARE this and generate much needed funds for the IMNDA - just text MND to 50300 or hit the donate button on the IMNDA website! thanks to Billy and Rod from Aslan and Bobby from SVI Touring for applying the finishing touch to the challenge!! This is truly hilarious and we look forward to seeing our nominees doing the deed!!" 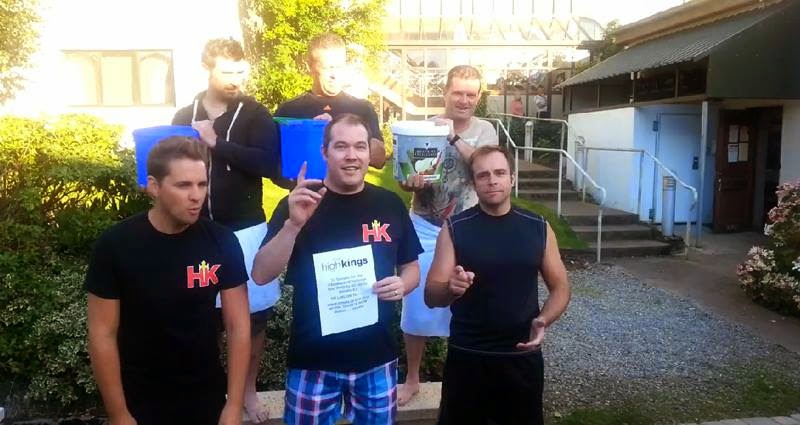 "Boarding a flight to Chicago bound for Milwaukee for the festival!! Should be a great weekend."

"Had the pleasure of our great friend Sharon Shannon joining us onstage in Milwaukee last night."
Photo courtesy of the highkings.com 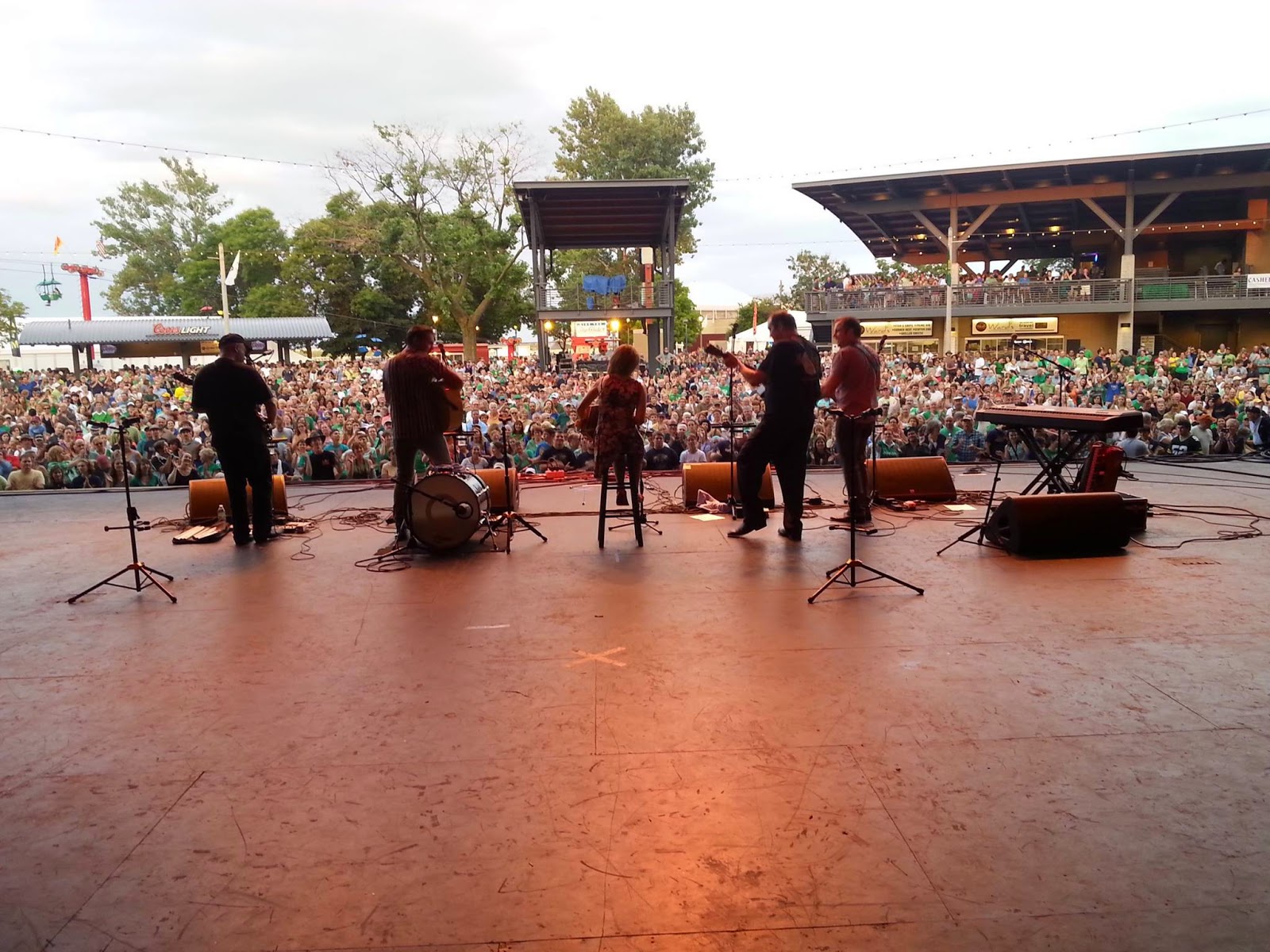 "Had a great meal tonight at The Safe House in Milwaukee with some of the guys. Brian went walkabout and found a reminder of the last time I was there with the Movin' Out gang."﻿

HK HQ signing off in Milwaukee!
"Well folks, we have had an amazing time at Milwaukee Irish Fest over the past few days, sadly we must return home tonight but we have all had the most enjoyable experience! Thanks to the thousands of volunteers who donated their services, t...o our magnificent stage crew at the Coors Light Stage and to you good people for coming out and enjoying the music. We return to the US for a few shows in early October, watch this space!! Milwaukee rocks!!"

As the High Kings were in recently in Milwaukee and Cavan, we thought you might enjoy this recording of Cavan Girl from Milwaukee in 2012
Back in February 2010, the High Kings dropped in to the studios of Newstalk radio for a performance interview. The programme had an 80's theme and they were asked to break from their folk tradition and perform an 80's song! So here they are with a once only performance of A-Ha's 'Take on Me' Enjoy!

The High Kings performing Red is the Rose on the streets of NYC for RTE R1 St Patrick's Day 2011.
Two years ago! The High Kings sang The Parting Glass to bring the Notre Dame PEP Rally Welcome Home concert to a close, the show was streamed to a worldwide audience on YouTube. RTE won't allow us to upload this video to YouTube, but you can watch on Darren's Facebook page.

If you enjoyed our video of the High Kings singing The Parting Glass at the Notre Dame PEP Rally, we thought you might like to have the audio version for free download with our compliments. 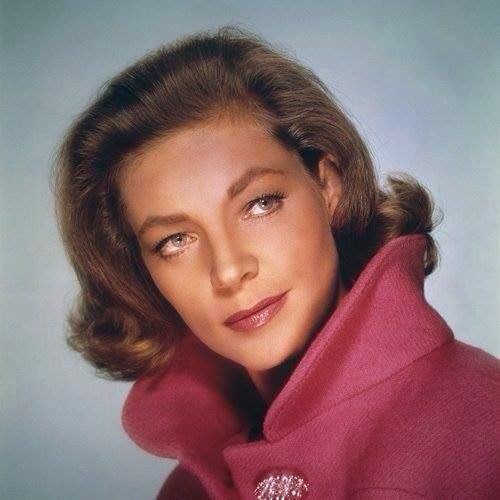 "Another Hollywood legend gone. I had the pleasure of meeting Lauren Bacall in New York while I was doing "Movin' Out". A star through and through. RIP"

"Another absolutely beautiful September day in Dublin. Could to with a few weeks of this.
Remembering all those who were lost or left behind 13 years ago today in the USA.#neverforget"

That's all the round up of the news for now, Darren and the lads are currently in the US performing a few shows before coming home to Ireland to prepare for the Irish tour. We will bring you more news as soon as we have it, but as always you can follow the regular updates direct from Darren on his Official Facebook and Twitter.

Posted by Darren Holden Official at 10:25