It's Christmas and time for the last of this years newsletters!

As per usual, things are in full flow and this year has proven to be the busiest in ages. Next year is shaping up to be something similar so hold on tight.

Thanks to you all for your continued support of me and The High Kings. I appreciate it.

I wish you all a very Merry Christmas and a Happy and Healthy 2015.

People of the Year Awards

“This Saturday night The High Kings will open The People of the Year Awards on RTE 1.
It's a huge honour for us to be part if this special show. Tune in after the main evening news.”

“Looking forward to tonight's "The People of the Year Awards" at the City West.
We will be opening the show with "Ireland's Call"
Always an inspiring event.
Tune in to RTE 1 at 9.30pm.”
The High Kings all dressed up and ready to go at City West! 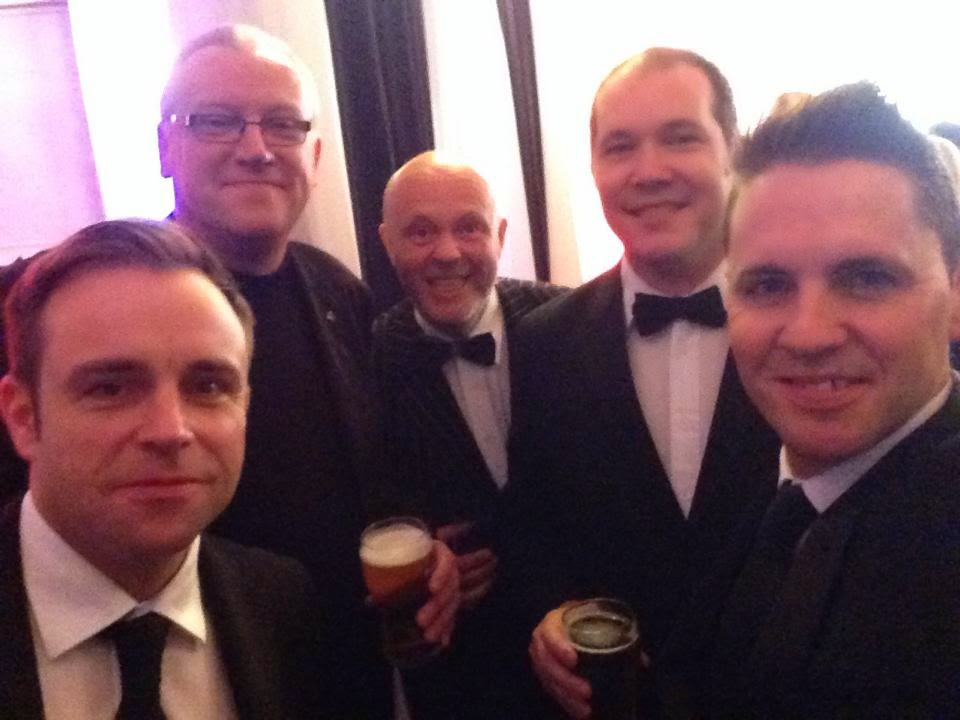 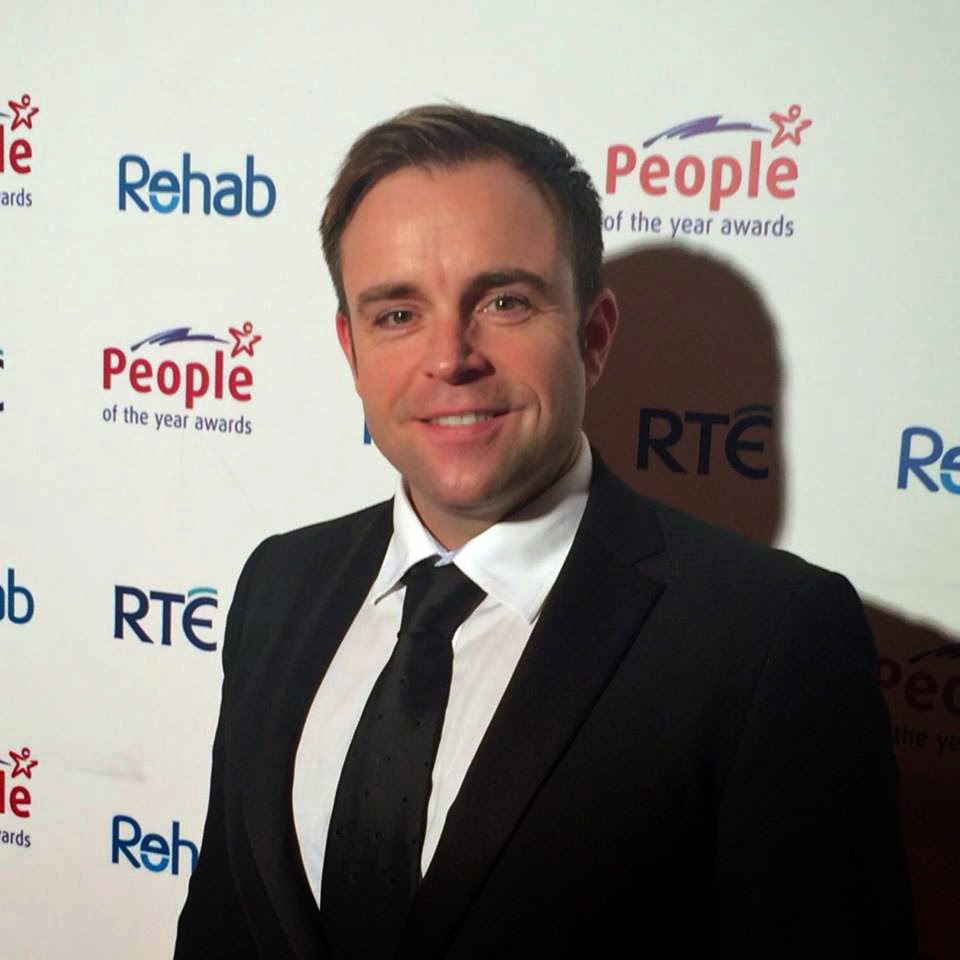 The High Kings were proud to be invited to perform Ireland's Call to open the 2014 People of the year Awards at Citywest Dublin. The event was hosted by Grainne Seoige and broadcast live on RTE One worldwide. 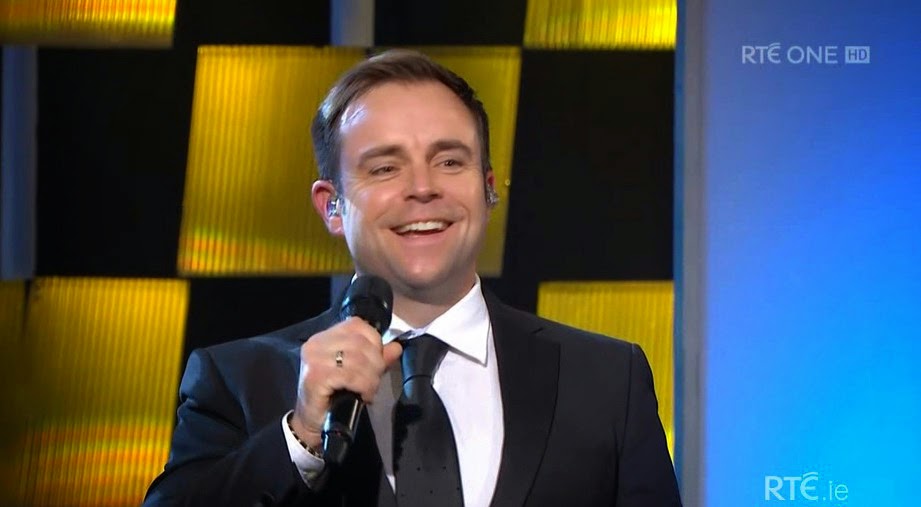 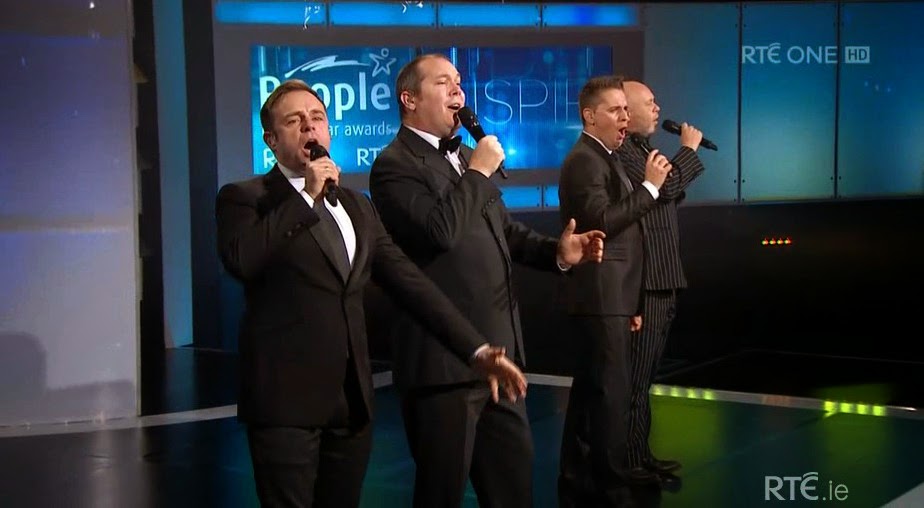 “With the legendary Paul McGrath” 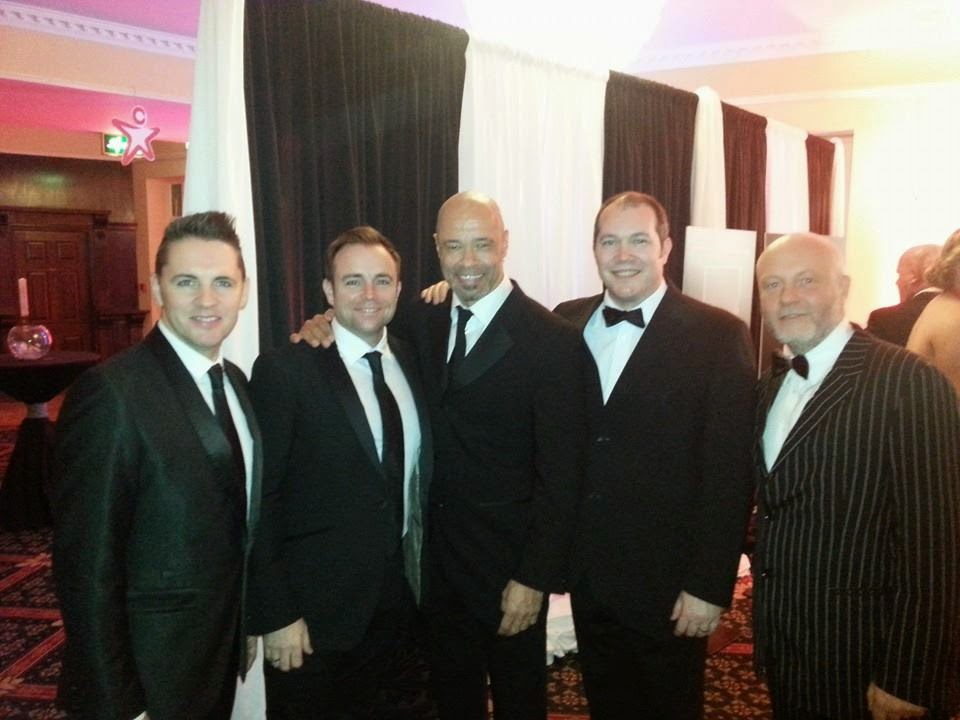 'Maybe This Christmas' Release
“The official video for "Maybe This Christmas" has just been released. Proud to be part of this great song and hoping that "Childline" and "Make a Wish Ireland" benefit hugely from it. Great job Sile Seoige
Song is released on December 5th.
Christmas number 1?
It's up to you.”
Maybe This Christmas is available in Irish record stores and from iTunes worldwide NOW, released 5th December. Please help Sile, Darren and Brian, and all involved, in their support of Childline and Make-A-Wish Ireland.

“Getting ready to open The Saturday Night Show with the "Maybe This Christmas" gang. Hanging with Brian and Barry Devlin” 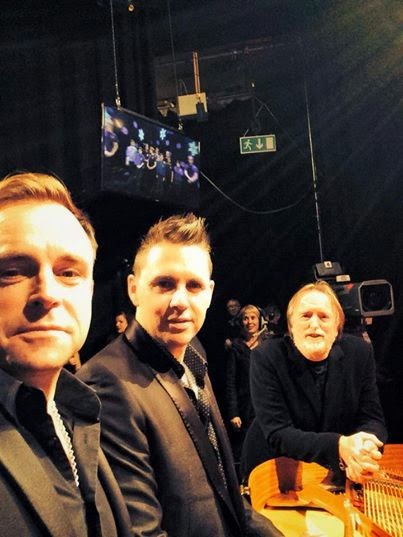 Darren and Brian singing along on the Saturday Night Show with Sile Seoige and friends for the TV debut of ‘Maybe This Christmas’. 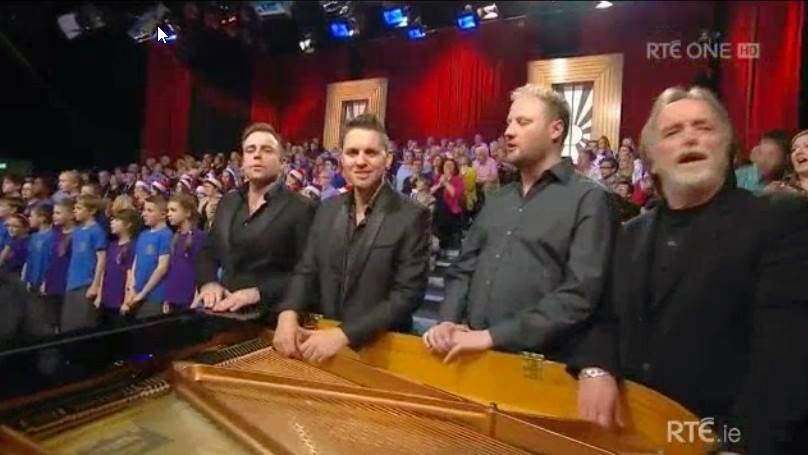 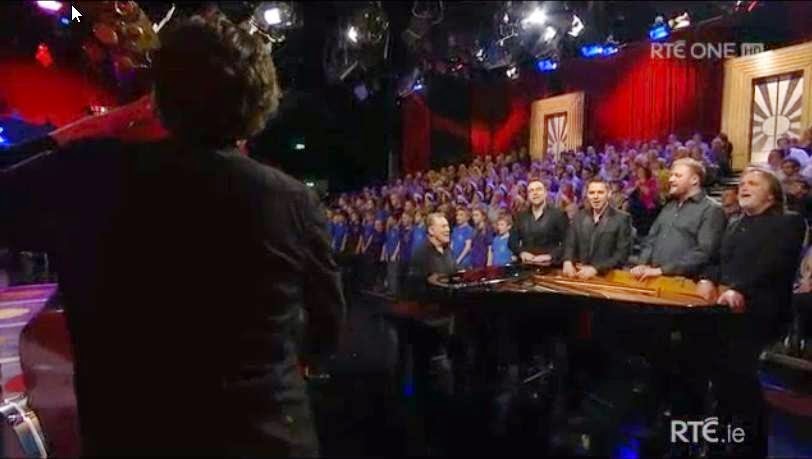 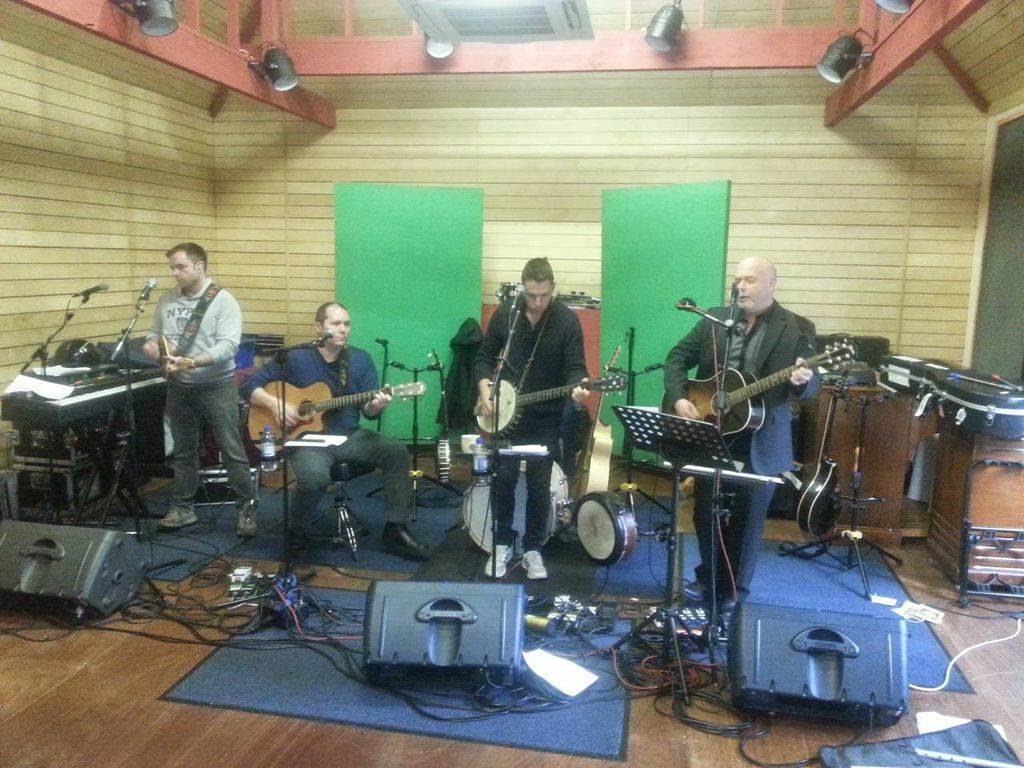 “Good morning all from HKHQ, it's an early start for us all today as the Four Friends Live Tour begins tonight in the Bord Gais Energy Theatre Dublin, expect some new song plus all the old favourites, our first stop this morning is on John Murray Show on RTE Radio 1 between 9am and 10am for some song and chat, don't forget to tune in
And let's not forget all our very dear friends in the USA who celebrate Thanksgiving today, we hope you all have a very happy and peaceful holiday and we look forward to seeing you all again in 2015.”

“On route to RTE Radio 1 to go live on The John Murray Show after 9am.”

The High Kings in the studio with RTE Radio 1 presenter Shay Byrne, who was covering on the day for John Murray. 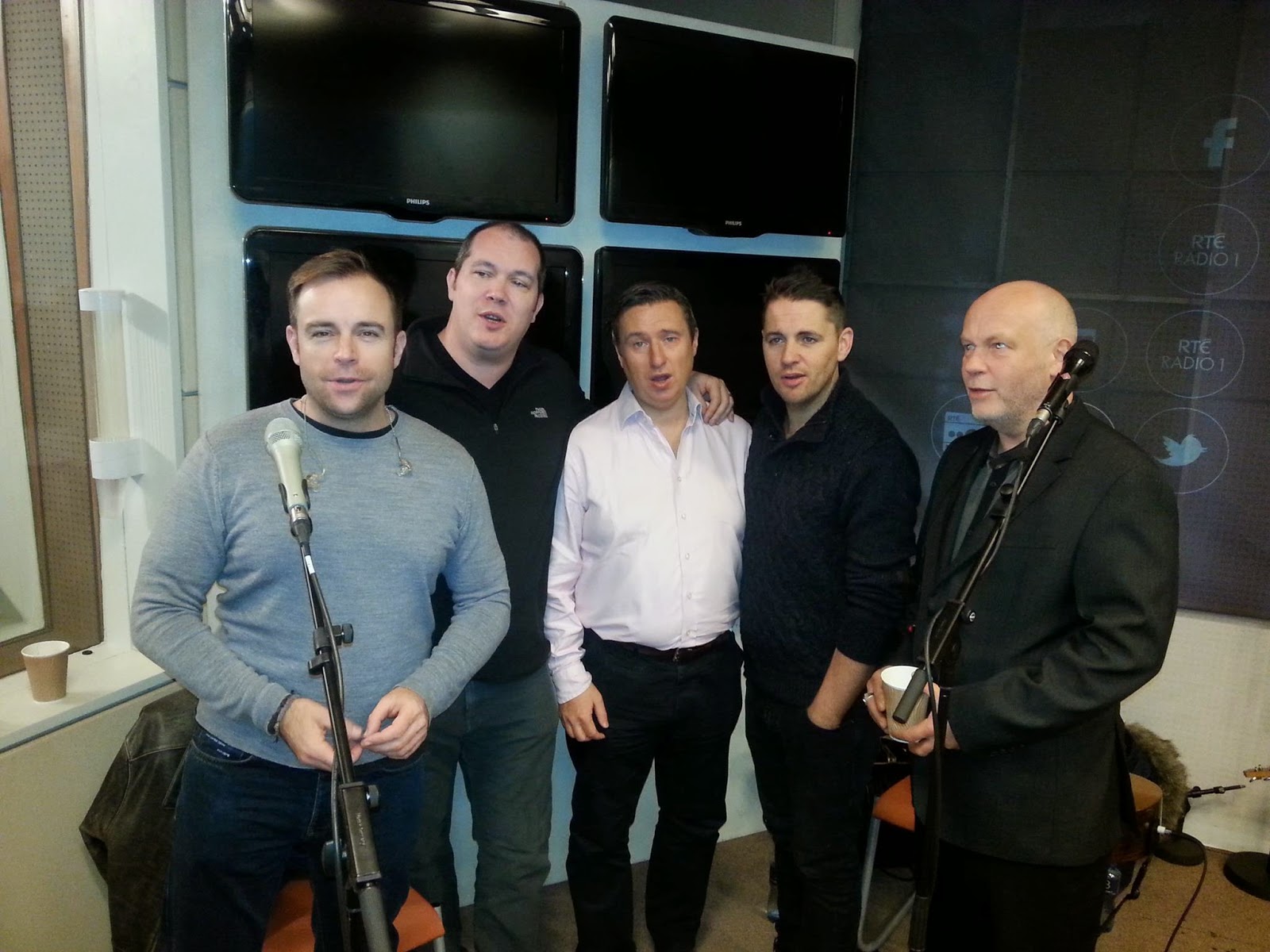 It was an early start for Darren and the lads, in the studio at RTE R1 chatting and performing a couple of songs with Shay Byrne.
You can listen with an option to download on this link. CLICK HERE

This is official RTE video footage of their studio performance of Marie's Wedding.


“Stage almost set for tonight's opening show of the tour at the Bord Gais Energy Theatre.” 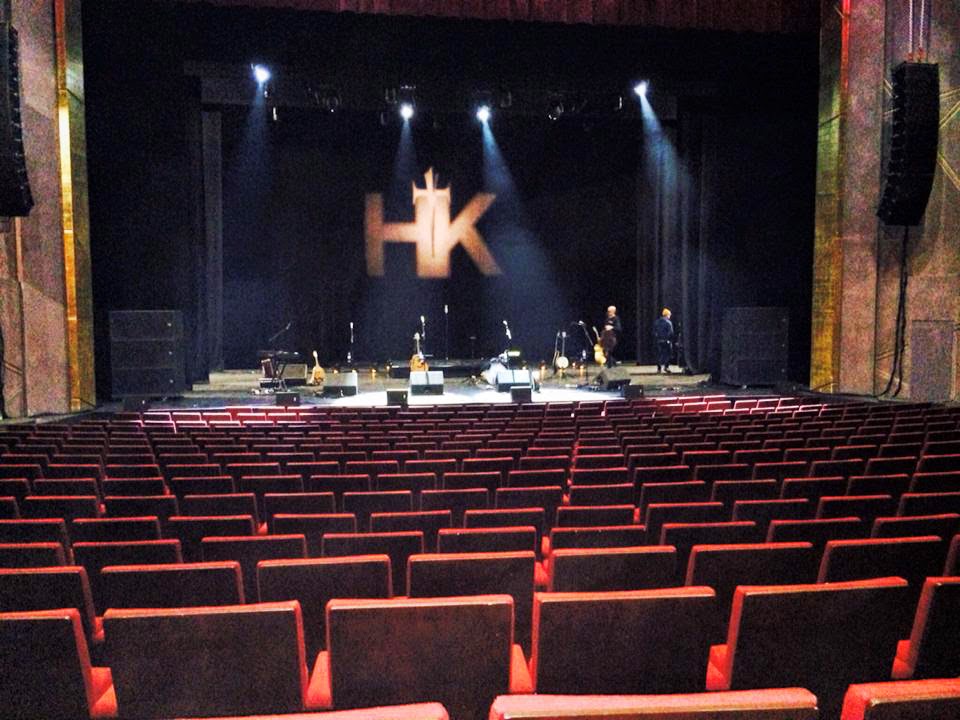 “Wow Dublin! What a night. Nothing like a couple thousand rowdy punters to start off a national tour. Great fun.
Thanks so much to everyone for kick starting the tour with such a bang.”There was no photography allowed during the show at the Bord Gais Theatre, but here is a photo of them at the end of a very busy signing!
Photo copyright Carol Billett 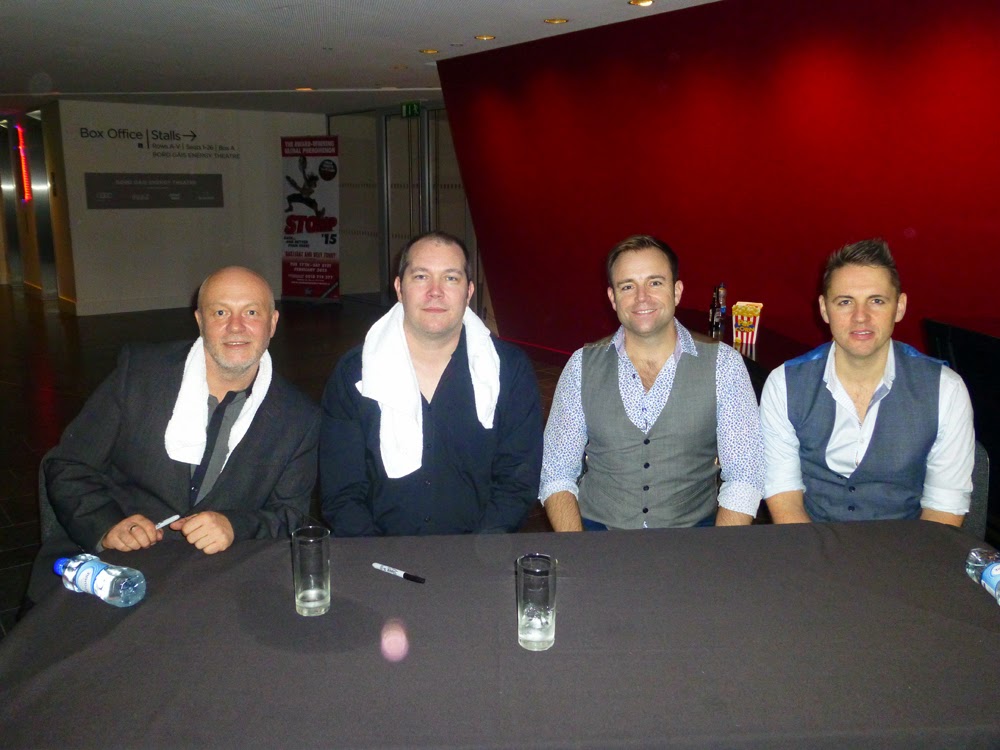 Listen to Darren chatting to Paul Dower on TCR FM. 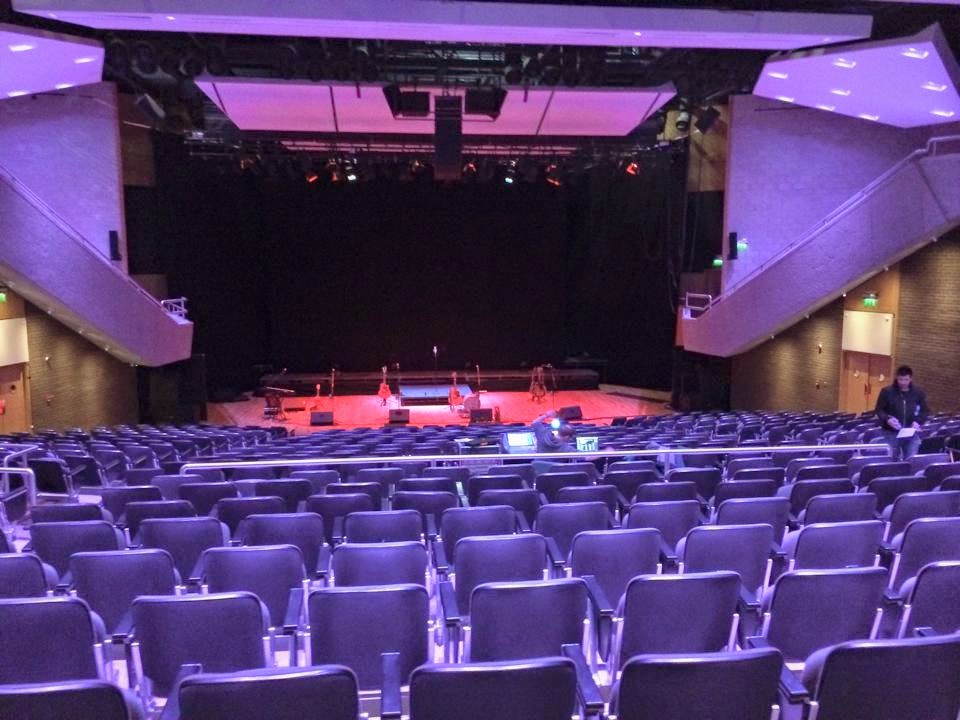 "Amazing crowd tonight at UCH Limerick.
Thanks to everyone who came out to see us. Great fun."Mullingar 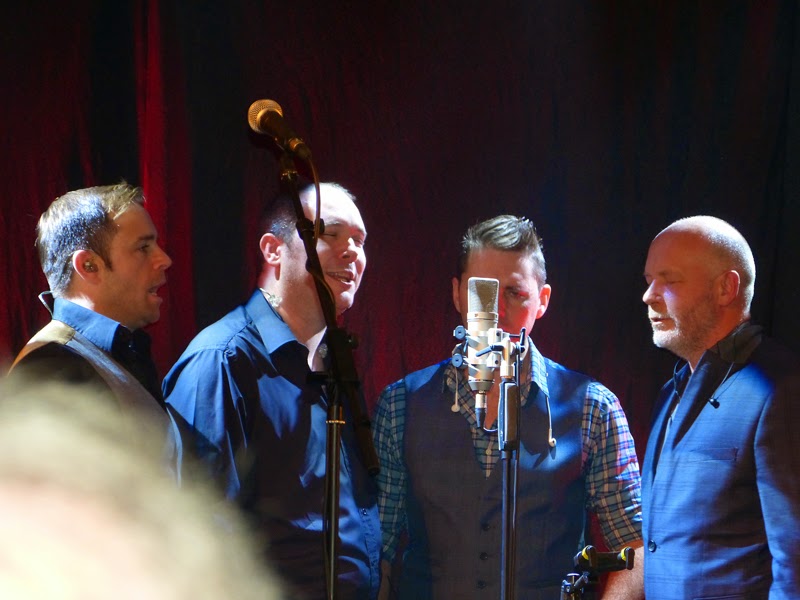 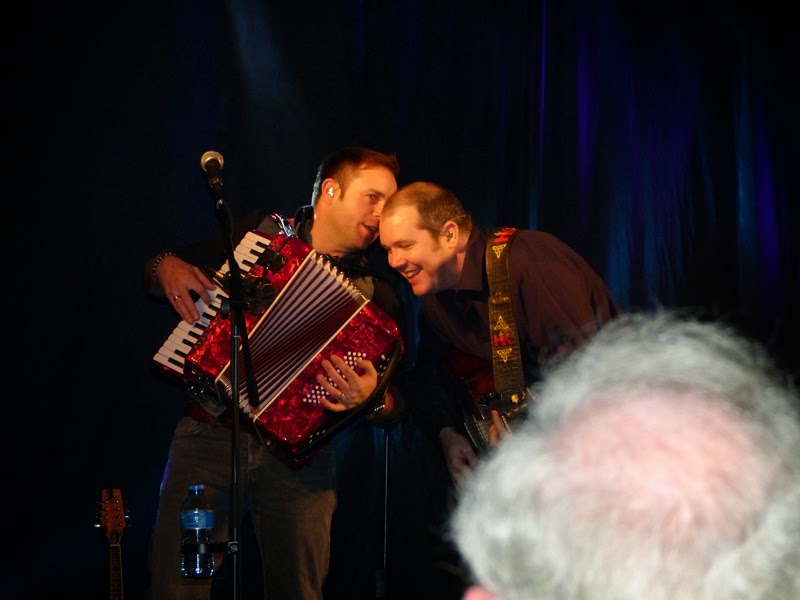 Update from HK HQ “Athlone! Are you ready!! Only a few hours until showtime folks, The Radisson Blu Hotel is the venue, doors at 730pm and showtime at 8pm!! We will of course be around after the gig to meet and greet anyone who wants to swing by to say hello!!”

A clip of the High Kings performing ‘Oh Maggie’ in Athlone.

“Stage getting set for tonight.” 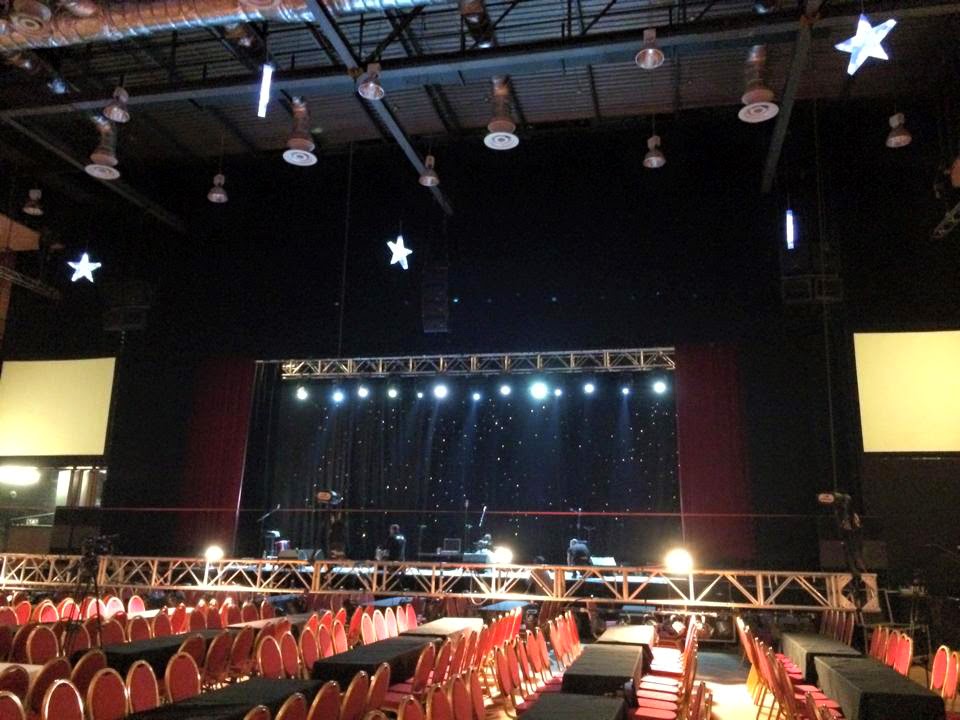 “Thanks to fantastic crowds in Athlone on Friday and the INEC Killarney last night. Great buzz. Good times.
'Tis a frosty morning and we're on the road again.”"What a view to wake up to."
#ChristmasinKillarney 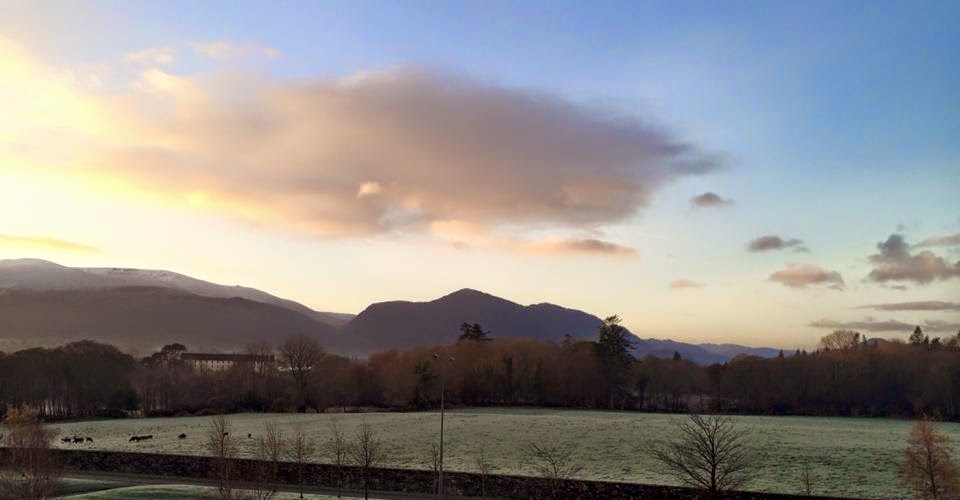 
Just a few annual Christmas treats from Darren and the High Kings to get you in the festive spirit! Firstly a couple of original Christmas songs, co-written and performed by Darren.

Back in 1976, long before any thoughts of becoming a High King, a little lad went to see Santa to tell him his Christmas wishes. 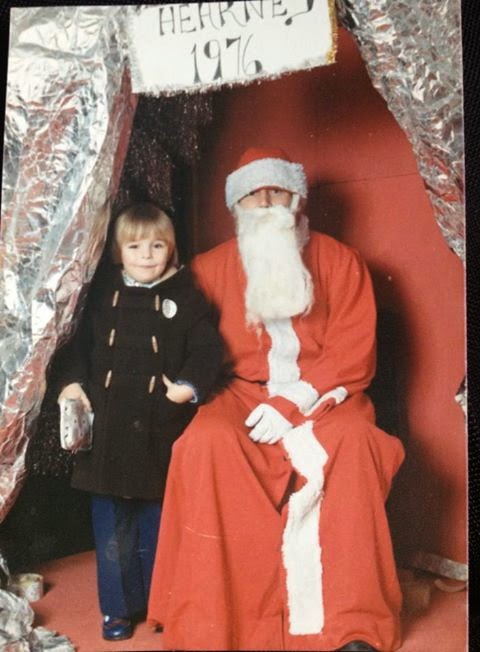 A few years later, in December 2004, that little lad was proudly performing with The US Marine Corps Band at The White House Christmas Pageant for President and Mrs Bush!
Finally a couple of festive treats from the High Kings! These two songs were recorded for the Celtic Woman 'Celtic Family Christmas' EP released in 2008, sadly no longer available.
A Final Few Words From Darren....
“Spinach really does work!” 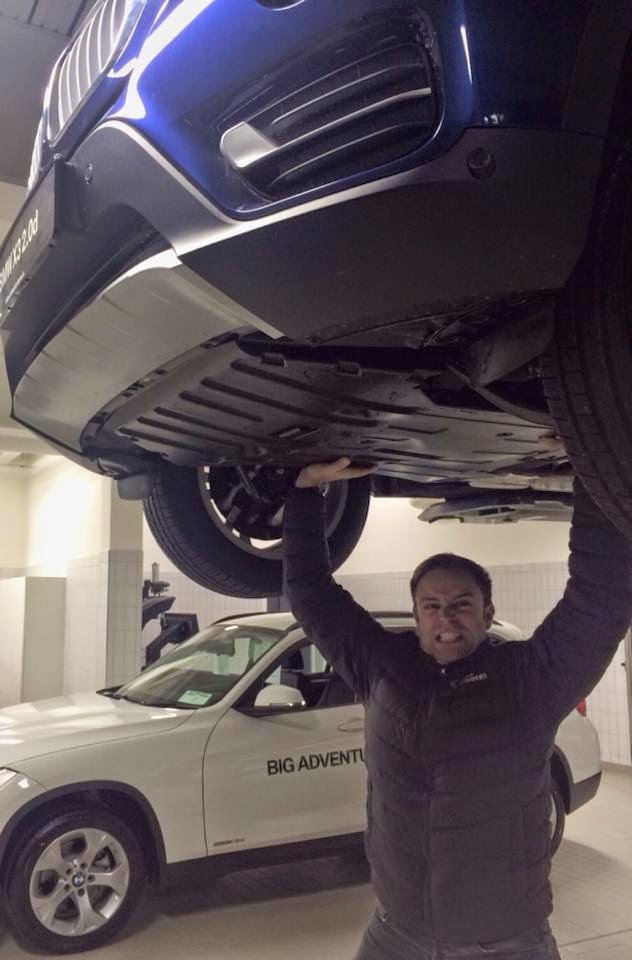 That's all the news for now, Darren and the lads will have a few days off for the Christmas holidays before continuing with in to the New Year with the Irish tour.

We hope you have enjoyed the round up of all the news from the past couple of weeks and the Christmas treats from Darren and the High Kings.

We will be back with more news in the New Year.
Merry Christmas and a Happy New Year

Thanks for your continued support!

Darren and the DH Team
Posted by Darren Holden Official at 18:27