"Looking forward to being back yet again on "The Six O' Clock" Show on TV3 this evening. I'll be sharing the couch with Danny O' Farrell and Paddy Houlihan. AKA Dermot and Buster from "Mrs Browns Boys". Should be fun!”

"Haven't laughed as much off set of a TV show in a long time. Great fun last night at TV3 with Dermot and Buster on The Six O' Clock Show” 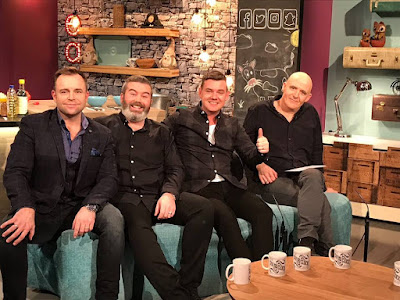 Watch Darren on the couch and in the kitchen on the Six O’Clock Show. 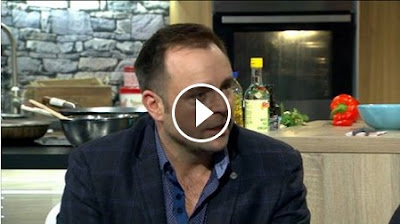 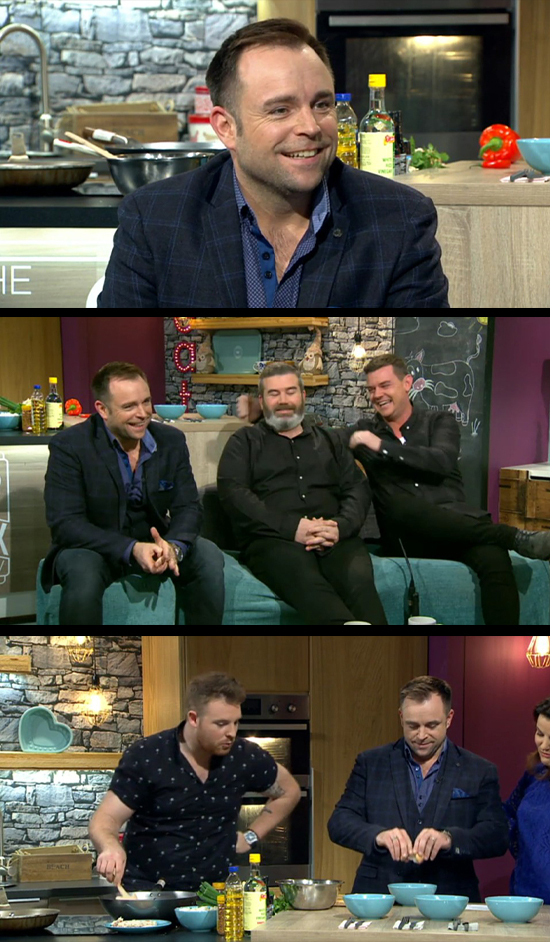 The latest news from Darren's endorsement with Emerald Guitars.

Emerald Guitars: “NEWS We caught up with Darren Holden from The High Kings before Christmas. The popular Irish group is touring the US again this March! Have you seen the popular Irish folk group live yet? We'd love to hear your stories!” 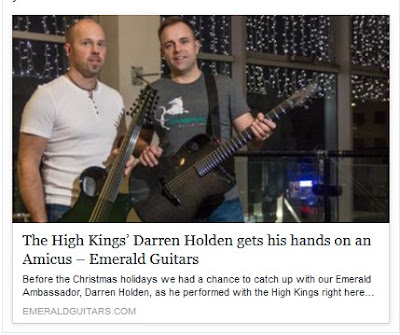 HKHQ Update: “We are delighted and honoured to receive the 'Outstanding Contribution to Irish Music Worldwide Award' at the Annual Sunday World Awards tonight!!” #proud #theboysarebackintown 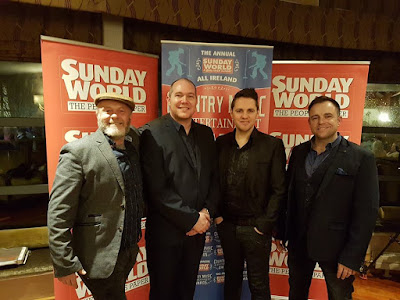 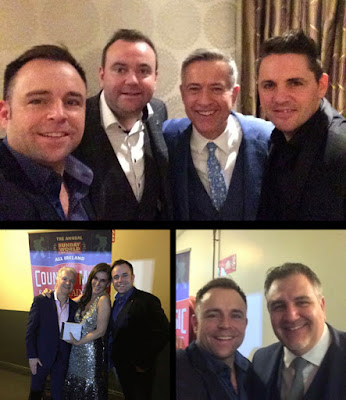 HKHQ Update: “Look what arrived to HKHQ today: Sunday World 'Outstanding Contribution to Irish Music Worldwide Award'!
'Grace & Glory' CD albums will be available to purchase in stores in the US from 10 February. Just in time for our upcoming US Tour” 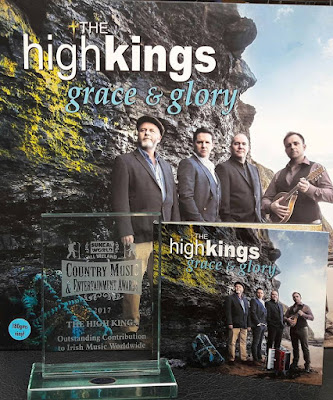 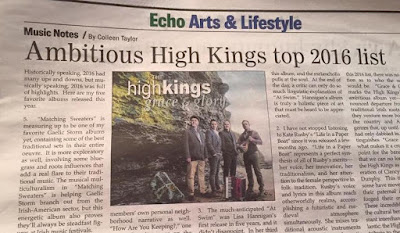 Click the image below to read the article online. 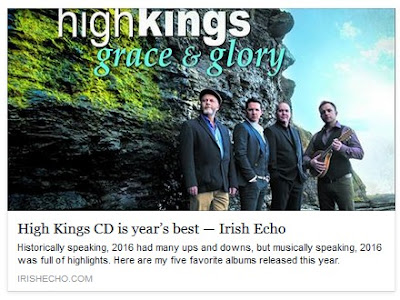 "Thanks to Eddie Rowley for a great piece in today's Sunday World newspaper. "

"Soundcheck at Ulster Hall, Belfast. Had a stormer here last year and looking like another one tonight." 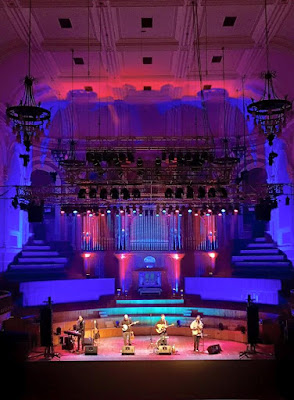 Town I Loved So Well Live!! 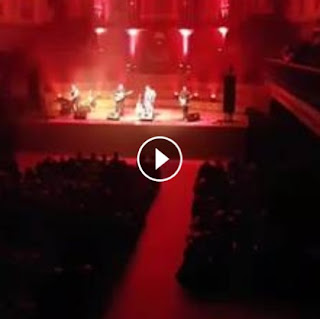 "What a special night at The Ulster Hall. Incredible audience. Thank you Belfast."
#hkontour 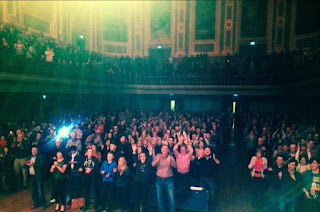 "A sold out Market Square Theatre in Armagh. Not much can top that on a good night. The loudest audience so far!" 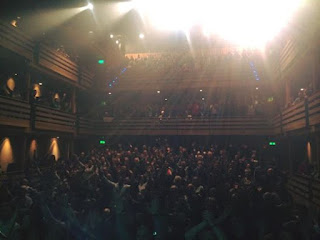 "Enniskillen! As always, one of the best concerts and crowds of the year at the Ardhowen Theatre. That was a reaction and a half. Loved it.
As always, I am humbled by the many kind comments after the show about our version of "The Town I Loved so Well".
It truly means an awful lot to me."

"Final concert of 2016 tonight was a sold out Strule Arts Centre show in Omagh, and what a way to sign off on what's been our busiest year to date.
Bar none, the loudest audience in months. They brought the party in a big way. Just how we like it.
Big thanks to our special guest, the very talented Lisa McCrory who joined us for a few songs.
Massive thanks to the hundreds of thousands of you who attended a HK show this year. We couldn't do it without you all!"

"What a night at Racket Hall Roscrea! Crazy sellout crowd. Favourite show of 2017. Here we go!!"

"One hour to show time here at The Landmark Hotel in Carrick on Shannon and it is officially a complete sell out and we've been told we could've sold out another tomorrow night! Unreal.
We'd have loved to, only we are sold out at the Millennium Forum in Derry tomorrow.
Tickets for this entire tour are fast disappearing so grab 'em quickly folks.
We are having the best time out there."
#hk #graceandglory

"One of the very special concerts we've done to date. The west rocked hard last night. Great to meet so many of you afterwards." #carrickonshannon
#hkontour 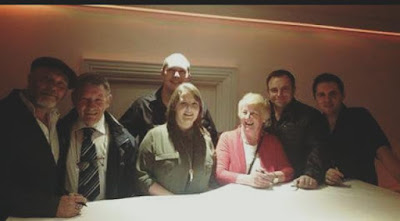 "Last night at The Millennium Forum in Derry was one of those nights that we will always remember. The High Kings have played this amazing venue many times, but this was bigger and louder than ever before. An incredible sold out audience.
You literally took my breath away at the end of "The Town I Loved so Well. To sing it in its hometown, is an honour that I will never take lightly. Its always been one of the greatest ballads ever written, but there are nights it becomes so much more than that. It lives, breaths and aches through ever word. The people of Derry are so proud of Phil Coulter and of this song. Rightly so.
I can never thank you enough for the countless lovely comments and messages from last night and I can only hope that I, and the guys, will always be able to do this wonderful song justice.
Its your song Derry. Thank you for letting me borrow it." 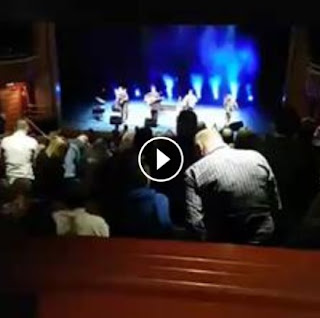 "Approval from the master"

"Newry! What can I say. A Sold out and absolutely brilliant audience!
This tour is fast becoming the biggest and best one for THK to date.
It's all down to you guys.
To the lady who came to the stage after "The Town I loved so well" thank you. I was very moved by your comment. Meant a lot.
To the gentleman who said he is going to write to his local newspaper about the way we do that song, thanks a million. The more people that know about what The High Kings are doing, the better. So great to see so many young folks coming out to this tour too.
We cannot do what we do without your fantastic support. You are all part of THK train.
Lets keep it rollin'." 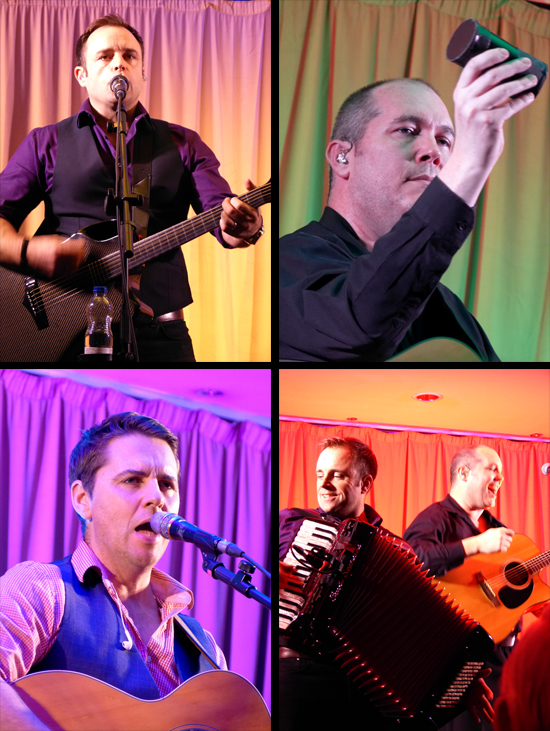 "Limerick.....that was fantastic. The concert hall has never sounded so alive! What a great audience. 2 hours of non stop fun. Thanks to everybody that came along tonight."

"Hello Galway. The High Kings are coming to Seaport this Saturday night!
I will be chatting to Keith Finnegan all about it on Galway Bay FM at 11.20am this morning.
Tune in if you can"

Listen to Darren's short telephone interview with Keith Finnegan on Galway Bay FM ahead of the Seapoint show.

"Seapoint. Galway. The scene of many a wild High Kings show over the last few years. Tonight is looking like staying true to form. The west is awake and buzzin'" 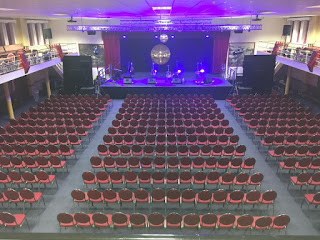 "Having toured the Grace & Glory album in numerous countries over the last 8 months, we experienced audience volume at a whole other level last night at the legendary Seapoint in Galway city.
That show could've gone on all night!
Massive thanks to what was easily one of the best crowds we've ever performed to." 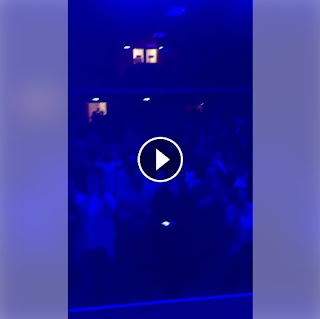 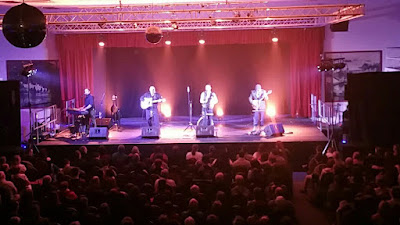 "Sold out tonight in Tullamore. Onstage at 9pm." 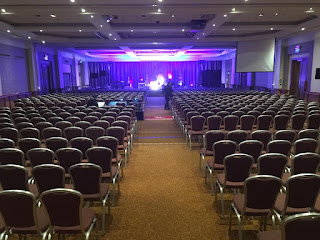 "Tullamore. Massive thanks for a fantastic night. One of the biggest crowds we've played to throughout this tour.
Thanks to Michael Duignan for the great hospitality also!"

"Wexford. No words necessary. Love this town and your incredible Opera House. Wexford is in my blood. Thank you for an unbelievable night." 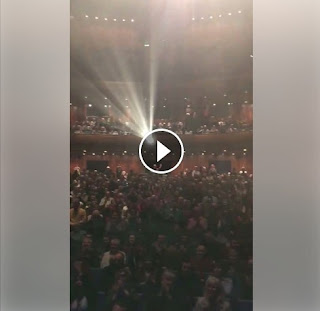 "Just over 1 hour to go to showtime." #soldout #waterford 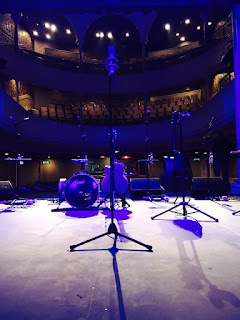 "I remember pucking sliotars with this lad when he was a nipper!" #timeflies 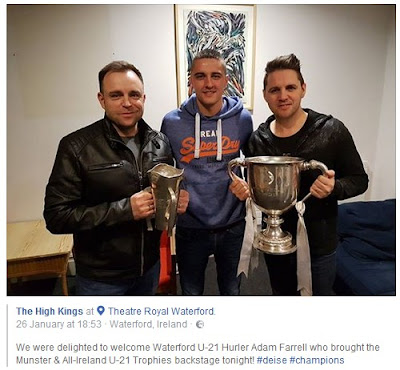 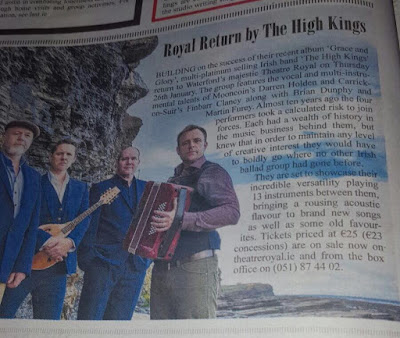 "Cork Opera House. Sold out! About to hit the stage for the penultimate concert of the "Grace & Glory" Irish Tour." 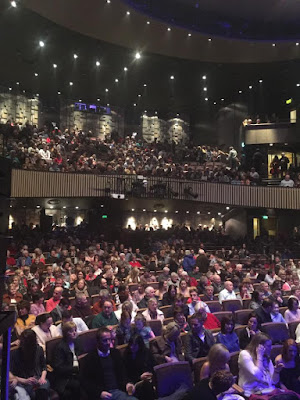 "Cork sent the volume into overdrive tonight . By far, the best show of the entire tour so far. Thanks to an unbelievable audience for coming out and helping us rock the opera house." 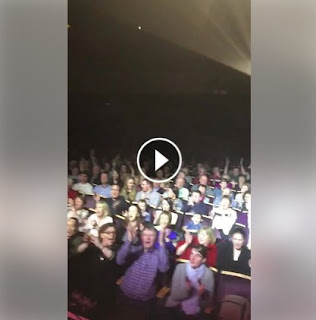 "A fantastic end to the tour last night in Carlow. Massive thanks to a huge crowd who brought the party and the atmosphere."

Dates for Holland and UK to be announced soon. Please keep checking www.thehighkings.com for the current tour schedule in the US and Ireland, and for any new dates being added. 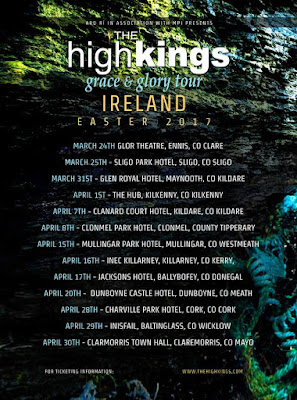 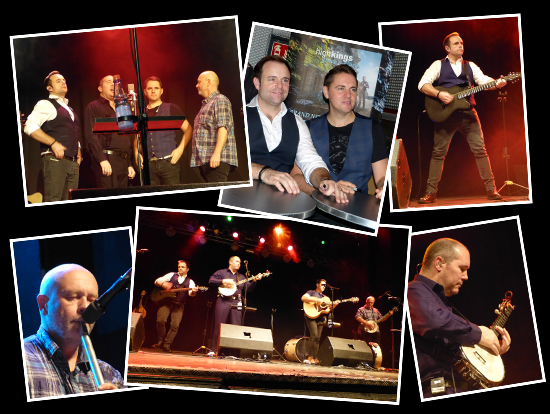 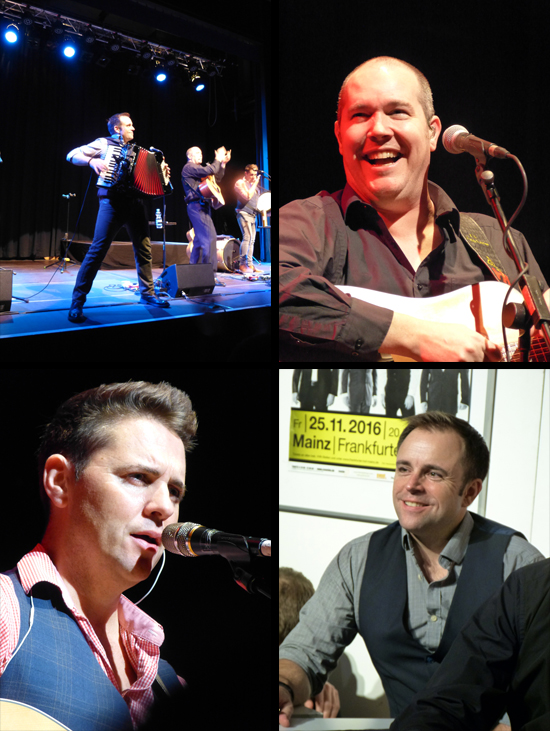 That's all the news for now, the High Kings are currently on a short break before heading back across the pond to the US in early March.


Thanks as always for your continued support

Posted by Darren Holden Official at 18:03