The High Kings are currently taking some time out to be with their families, but Darren recorded this short video for you before he signed off for the holidays! 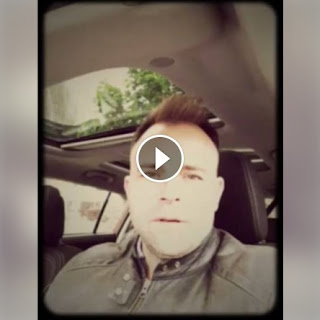 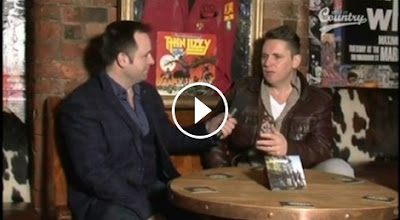 A couple of photos from the recording of the show.

“Proud to be heading home to Mooncoin this morning, where I am guest speaker and presenter at The Student of the Year Awards at my former secondary school "Collaiste Cois Suire".
I'm honoured and grateful to receive this very kind invitation.”

“I'm not normally too emotional or overwhelmed but I can honestly say that today is a day that I will never forget. I had no idea that so much effort had gone into my being home at my former secondary school "Collaiste Cois Siuire" in Mooncoin to present "Student of the Year" awards or be guest speaker.
What an incredible welcome!
The years rolled back as I met all my former teachers, Dennis, Jim, Mr Cool...Stevie and Principal Tom Walsh who were there especially for the event and we reminisced for hours.
I have to give huge thanks to my woodwork teacher, Martin Gordon, who along with Principal Paul Duggan, Imelda, Michelle and my former neighbour Maureen, extended the very kind invitation to attend this years awards.
The students were an absolute credit to the school and I'm most grateful to them for appreciating what I had to say and singing along with me at the end of the ceremony.
The video reel of my career to date was a big surprise, but the school pic at the end was the icing on the cake haha. The gifts of a framed pic of Rocketts Castle and a Hurley signed by all the teachers will have pride of place in my home.
Privileged to have had my parents in attendance, along with my sister and my son Josh.
As always the pics are courtesy of the great Joe Cashin.
One to remember."

The career video they played as Darren’s introduction. 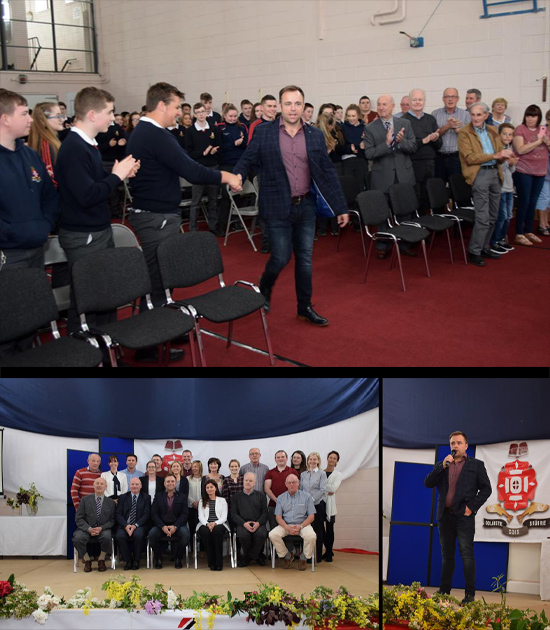 As Darren posted, he was honoured and overwhelmed by the reception he got yesterday at his former secondary school "Collaiste Cois Suire" in Mooncoin where he presented "Student of the Year" awards and was guest speaker. But Darren couldn't go home without singing them a few songs, including their anthem Rose of Mooncoin. Thanks to Joe Cashin for for recording it and sharing it!

Darren 'back to school' performing The Town I Loved So Well, in the village he loves so well. Thanks to Joe Cashin for recording and sharing.

Darren's schooldays have been Over a while, so why not sing it for those still there, along with Hand Me Down My Bible. Thanks again to Joe Cashin for recording and sharing it.

This is a video displayed on the 'Coláiste Cois Siúire' website. It was put together with photos and video clips as memories of Darren's return to his former school in Mooncoin for their awards day.

"Big thanks to Joe Cashin for full page coverage in this weeks Munster Express of Colaiste Cois Siuire Student of the year awards a few weeks ago in Mooncoin.” #oldschool #highkings #proud 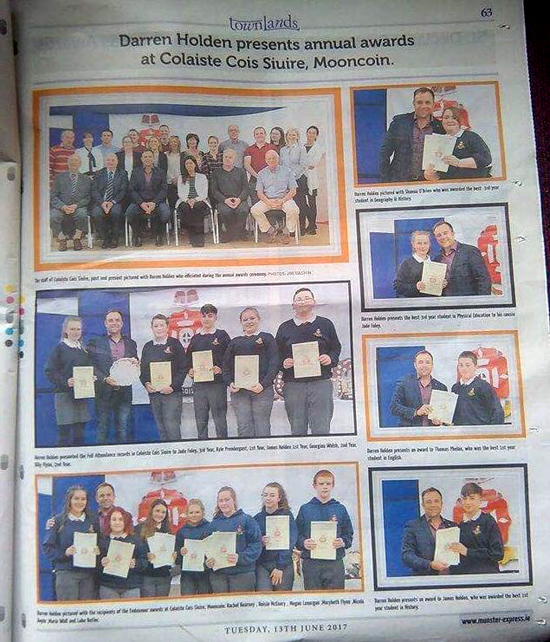 “More great coverage in today's Munster Express of the recent visit home to Mooncoin and Collaiste Cois Siuire. Thanks so much once again to the ever reliable.” Joe Cashin. 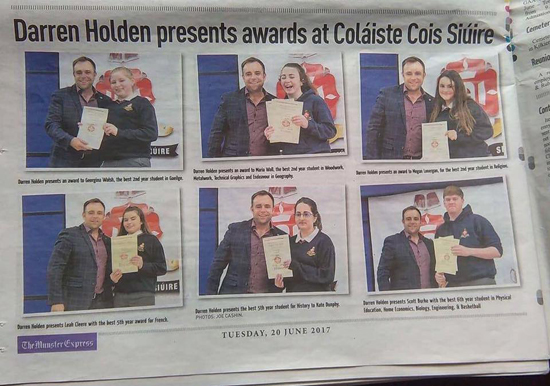 After the soundcheck at Parr Hall Warrington, Darren made the most of the great sound and acoustics. Here he is performing New York State of Mind on the piano, just as he did all across America up on that platform in Movin' Out. 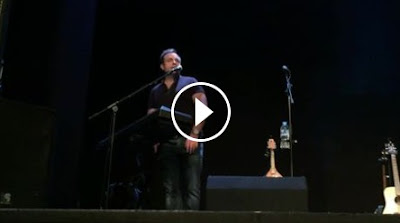 “I recorded this to mark 25 years since the passing of the wonderful Spyder Sympson on 29th May 2017. Just a little something in his memory.” 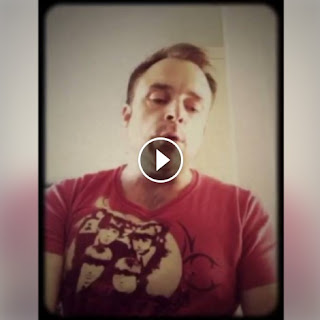 Listen to Darren chatting to WLR FM presenter Geoff Harris on the 'Lunch Box' show ahead of the High Kings show in Dungarvan at the end of June.

A little clip from the first known recorded footage of Darren performing back in 1989. This is Johnny B Goode with his first band Breakaway at Howley's Lounge in Mooncoin at the tender age of 16. 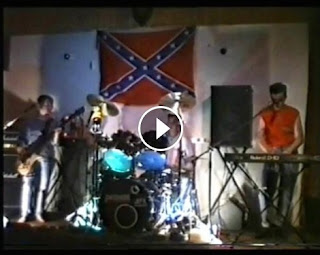 “Carrick on Suir! Absolutely brilliant night. Thank you so much for an incredible welcome back.” #clancyfest 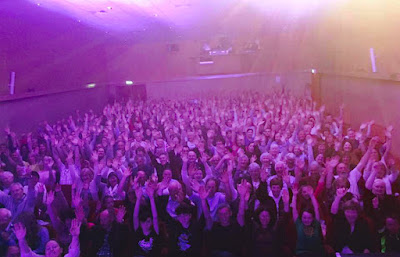 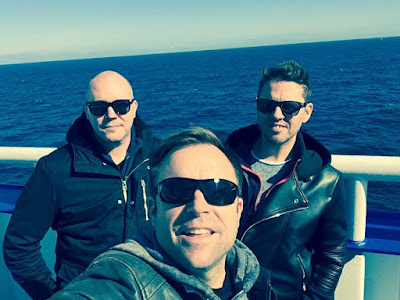 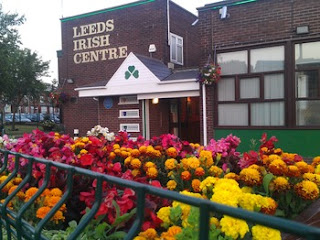 Listen to Darren chatting to Gail Lofthouse on BBC Radio Leeds ahead of the High Kings show at the Leeds Irish Centre. 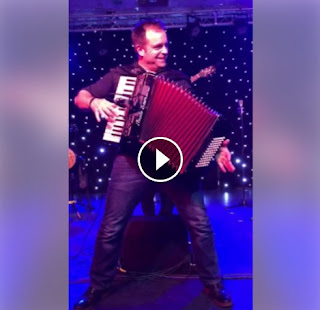 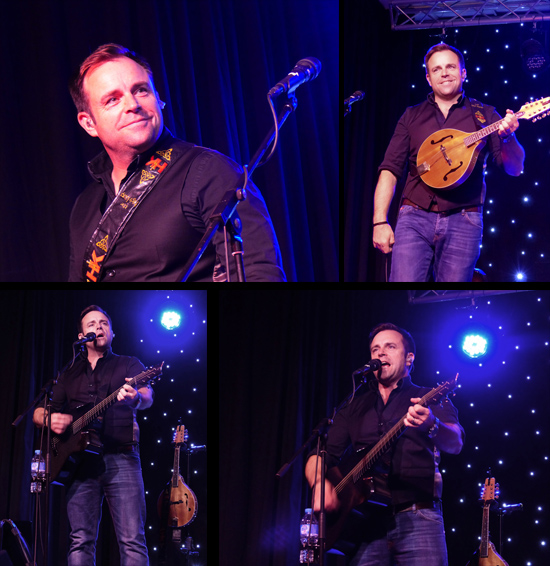 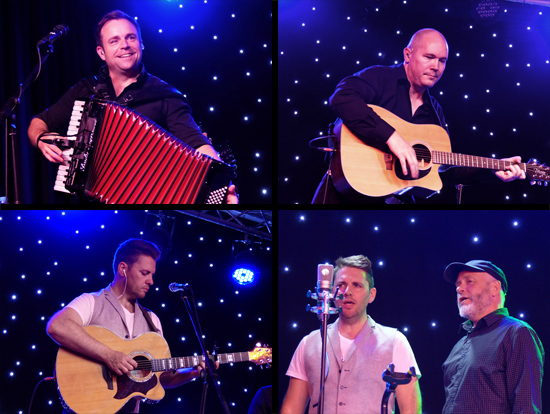 “Leeds! Thank you for an amazing show last night. A fantastic Yorkshire welcome. Onwards to Warrington for tonight's concert at Parr Hall.”

“Then there are days when the hotel is 'this' great.” #Villagehotel 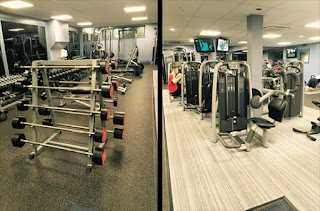 “A wander around Warrington.” #hkuk17 #mersey 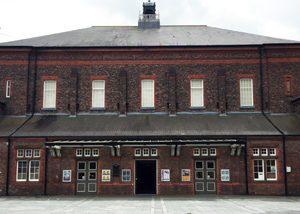 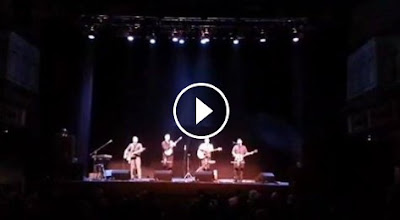 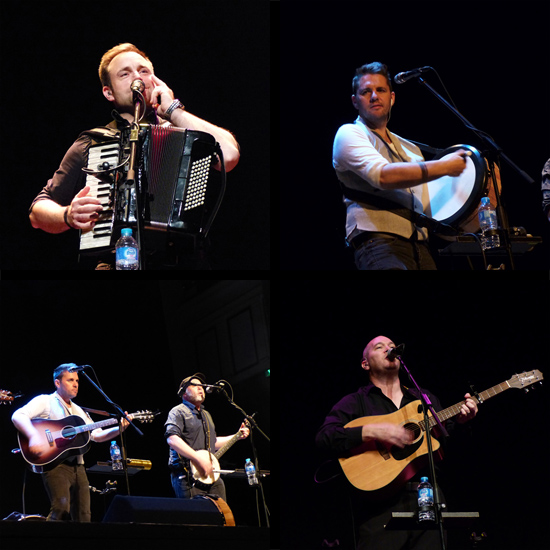 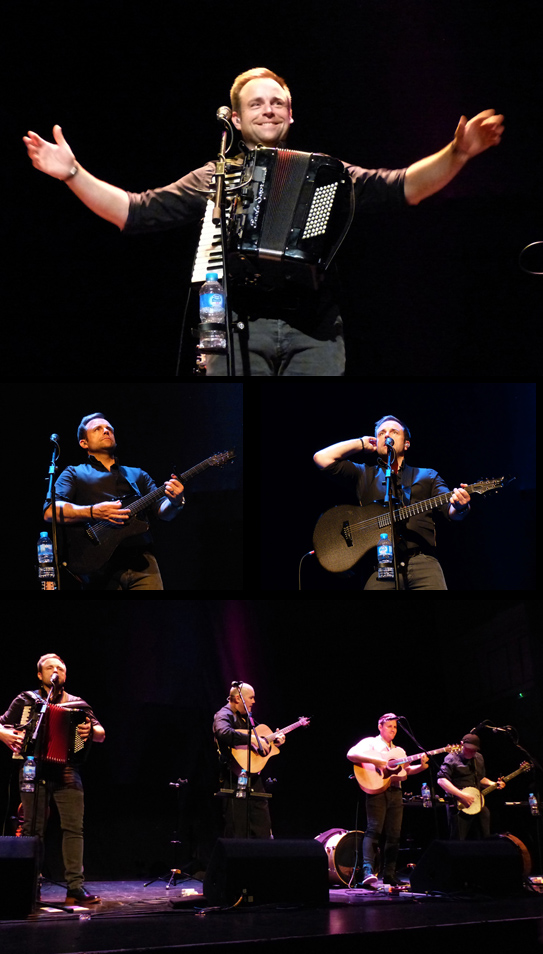 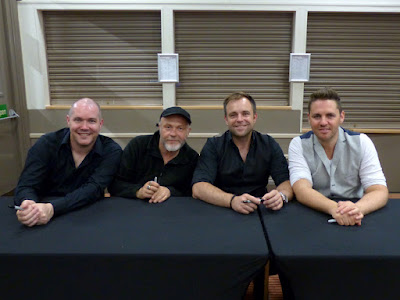 “Parr Hall Warrington tonight was quite literally off the scale! That's the kinda show I'd like to play every night! Fantastic atmosphere from an outrageously great crowd.
Absolutely loved it!” 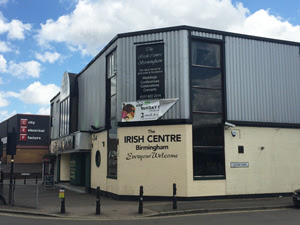 The High Kings performing Red is the Rose on the final night of the tour in Birmingham, including a proposal happening in the front row! 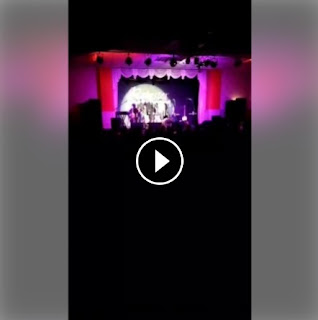 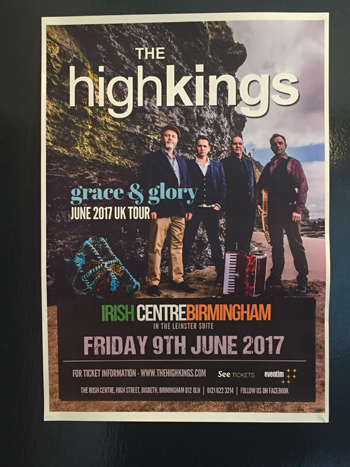 “What a way to wrap up the UK tour. Ultimate crowd in Birmingham! The loudest and greatest audience in yonks. Couldn't get enough of it. Thank you so much to everyone for giving us one hell of a night.
This one will live long in the memory.”
#hkuk17

Check out www.thehighkings.com for a full schedule of confirmed 2017 dates and ticket links. 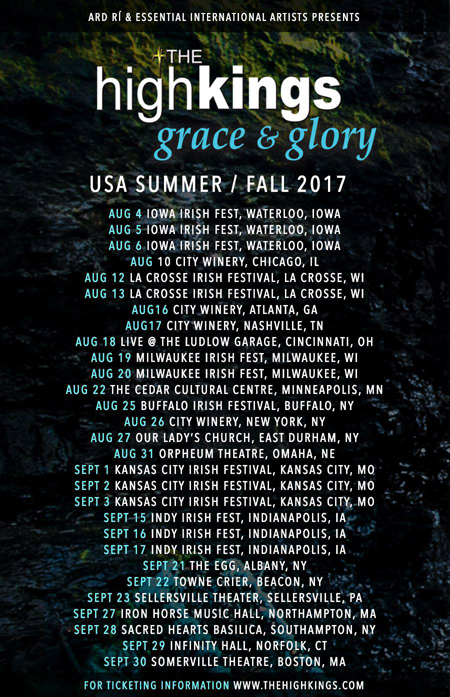 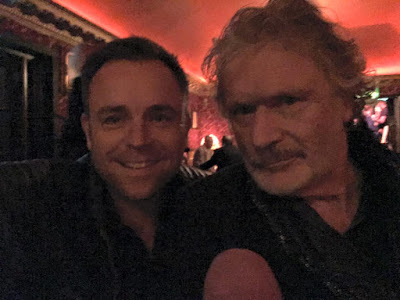 That's it for now!
After their much needed break, and a few Irish dates, the High Kings will be heading Stateside during most of August and September. As always, we'll bring you a round up of all the latest news as we get it.

Posted by Darren Holden Official at 19:29