Well the High Kings are still on their break and Darren has been in demand to perform a couple of exclusive solo gigs, not open to the public.


"Hey everyone, I have some solo dates this weekend....Saturday the 18th I will kick off at "The Library in Lillies Bordello" at 12am til late
Monday the 20th at "The K Club" Straffan Co Kildare."
The first on Saturday night was an exclusive 'invited members only' gig with Darren taking to the piano at midnight. It wasn't until he got to the venue that he found out that this exclusive event was even more high profile and exclusive than he thought!
Ok so... Just got to my show to find out I am the official entertainment for the aftershow party of a certain Manchester 5 piece!!!
This was a little video blog he recorded from the venue.


The Manchester 5 piece, which he couldn't name at the time, were of course Take That who had performed at Croke Park to a sell out crowd earlier that evening. The evening was a great success and although Robbie, Gary and Mark weren't there, opting to return to their hotel, Howard and Jason both were. There were plenty of other celebrities on hand ready to be entertained by Darren too. Darren enjoyed the evening and posted this before setting off for home in the early hours.


Wow!!!! Amazing night! Hung out with Howard and his buds after I did my thang. Who's who of Irish celebs there including,BOD and Amy,Rob Kearney,Grainne Seoige,and my old pal Louis. Heading home now for 3 hours sleep.....lol
This is an online version of an article from the A List event in the Evening Herald.

We especially like the bit
"Musician Darren Holden provided the entertainment and both Jason and Howard said they were very impressed with him".
Tonight Darren is doing his second solo show at the prestigious K Klub at the Kildare Hotel in Straffan Co Kildare. He will be performing a 2 hour set for yet another celebrity audience as they attend a Golf Classic corporate event. 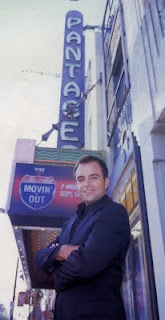 Darren has shared a very special performance of him performing as the 'Pianoman' in the Billy Joel musical Movin' Out from his private collection. The show is the opening night at the Pantages Theater in Los Angeles September 17 2004. Darren was joined up on the platform at the end of the show by none other than Billy Joel himself. The photo on the the left was taken of Darren outside the theater during the 6 week run and featured in a Venice Magazine interview article which you can read on his official website CLICK HERE


We have added the first couple of video clips to YouTube tonight, Shameless, and a medley of River of Dreams and Keeping the Faith. The video has been filmed from the circle of the theater of the whole stage, so there are no close ups of Darren. But his voice and piano skills are there for you to enjoy from up on his 30ft platform with his band.


We will be adding more songs over the coming weeks.
We hope you enjoy watching Darren in Movin' Out, the press at the time certainly did. Here are a few quotes. CLICK HERE to read the rest.
"Keep your eyes and ears tuned into Darren Holden's vocals and piano playing. Whether Holden is belting out 'Keeping The Faith' or crooning 'She's Got A Way,' he pours such life into the melodies that they seize the heart and won't let go!"
-Jan Sjostrom, Palm Beach Daily News  January 11, 2007

"Holden oozes charisma; he emotes as he sings and he looks down on the characters from his perch (the band is suspended on the catwalks above the stage) like a storyteller. He brought the audience to their feet."
-Molly Bettiga, Voice of San Diego October 11, 2006
"Darren Holden truly holds Movin' Out together and pumps out song after song with great passion. He's not imitating Joel, he's a star in his own right. He's sexy, breathy and really rocks."

-Ellen Fagg, Salt Lake Tribune June 21, 2006
"Holden leads his high-energy ensemble through more than 20 Billy Joel songs, but he makes no attempt to imitate the master. With his sometimes-raw tenor voice and two-fisted piano style, he gives songs such as "Angry Young Man" and "Captain Jack" an urgency that even Joel doesn't equal."

That's it for now, back with more news as we have it!
Thanks for your support
Darren and the DH Team
Posted by Darren Holden Official at 22:27