Message From Darren and More Movin' Out

This is the message from Darren that introduced the latest edition of his newsletter, issued last weekend.
Hey everyone,
Can you believe it's another newsletter aleady!!  Well, thats what happens when there's a lot of stuff going on. I actually planned to use the HK vacation period to relax and chill, but it's been a totally different story, with numerous solo shows booked and more turned down for next month and beyond as I can't fit them around our schedule. I have absolutely loved being out there again doing my pianoman shows and not only was the audience reaction mindblowing at each show, the memories that came flooding back to me with every song was amazing.
To get to perform for Howard and Jason from Take That was very cool indeed, and have them sit beside me and sing a few tunes and just hang and chat was brilliant.
Thanks to my old friend Bruce Allen, who manages Bryan Adam's, Michelle and myself were once more invited along to see his show on Thursday night here in Dublin. As always, he rocked big time. What a singer, what a career!
As I write this, I am gearing up for yet another solo show tonight in "Lillies Bordello" in Dublin. I don't know who may show up tonight to sing with me, but you can be sure" Lillies" is the place to be.
'Til next time, take care and stay safe!
DH
Darren's Official Newsletters
As you can see from the above message, Darren is very personally involved with his newsletters and the latest edition, Issue 3, also has Darren answering some questions put to him by the fans. If you sign up now for future issues, you'll get a link to the latest edition and be able to see Darren's Questions & Answers, and have a chance to ask him some questions yourself. You can sign up using the Sign up form on the left of this blog.
To read the previous Issue 2 you can click this link Darren's Newsletter Issue 2
More Movin' Out Video
We have now added two more videos of Darren performing live in Movin' Out at the Pantages Theater in LA back in September 2004 to YouTube
Just The Way You Are

Summer Highland Falls
We will be adding more over the next few weeks.
Kilimanjaro Documentary
The long awaited documentary of the 'Climb for Kids' Kilimanjaro climb has now been edited and finalised and will be aired on RTE1 at 9:35pm on July 18th. This is a much deserved prime time slot after the news and it is sure to be a very emotional time for the 30 strong party who did the climb, and their friends and families sharing the experience with them for the first time.
Unfortunately, it looks as if it is going to be Ireland Only viewing online so fans outside of Ireland are not going to be able to watch. If this changes, we will let you know. Just as a little taster, here is the final version on the promo video.
New Cork Date Added.....
The High Kings have a number of Irish dates before they set off for America, including two shows at the INEC/Gleneagle Hotel in Killarney, and the Royal Theatre Castlebar. But they have now added another date at the Neptune Stadium in Cork where they will be performing on the final night of a 3 night festival of music, with John Spillane.
Tickets for all the events are available from www.ticketmaster.ie 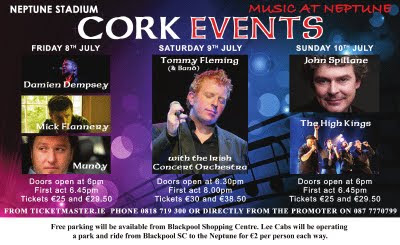 Final Few Words From Darren
The High Kings have been on a break during June and Darren took the opportunity to take a holiday with his family. They are back on stage in Cashel tonight for the first of a few shows in Ireland before they set off for a string of Irish Festivals in America during July and August.
Here are Darren's status updates from the last few days.

"Just received an e-mail from the Take That camp, thanking me for a great show at Lillies on Saturday night last! Now how cool is that!"

"Lillies!! What a night. Great crowd who brought the party to The Library! Loved it.
A heaving sweaty night with everyone singing with me from start to finish."

"Still rocking from Bon Jovi last night! Amazing gig and one of the best crowds ever to be part of. Gotta motivate myself for the gym now, then the wife and I are off to the "Music Through Time" event in the city, celebrating a collaboration between Gucci and The Grammy's. Should be fun."

"Getting ready to go see Princess Ava in her first play today, then its off to Cashel for the first High Kings show after our summer break."

That's it for now folks
We will be back with more news soon
Darren and the DH Team
Posted by Darren Holden Official at 23:12