The High Kings at the White House!

Well it's been a very exciting week, the big news was under wraps for a while, but the clues were there in 'extracts' from Darren's Status updates in the build up to the big day! He wasn't allowed to say, but there was a little hint here and there!

"Then on to the USA for a few days with a very special event on Tuesday.”

“Early start to the USA in the morning.”

It was obvious he was itching to tell as the status updates dropped even bigger hints!

“Early start to the USA in the morning.”
Well, after a long day of travel, we finally landed in............: )”
Seriously folks, if I could tell you I would. The weather is amazing, and we are about to go and perform 2 songs at a gala ball and join many Irish dignitaries for dinner afterwards.
Tomorrow..........: )
I will say this. its so great to be back in the USA.”

“First appearance done. Really fantastic event attended by a famous Irish man. Good vibes all around. I have some great memories of where we are, when Michelle and I attended something amazing a few years back when I was performing on my lonesome. I am certain that it will again be very special tomorrow.”

Then finally the secret was out!

“Hey Everyone. Tonight...... we are playing at The White House for President Obama, at the request of the main man himself! We are so excited to be here, and I cannot believe I am getting to sing there again! Crazy.
A massive day awaits us, and at 6.30 we get to sit down with 'Ol Barrack.
Can't wait!”

“Soundcheck done. Completely surreal yet again. Just got to wander around the big house by ourselves and chill amidst so much history. Blessed to get to do this again, and very grateful. Roll on tonight. Unfortunately the many pics taken will have to remain private. House rules.”

This is the official Press release! 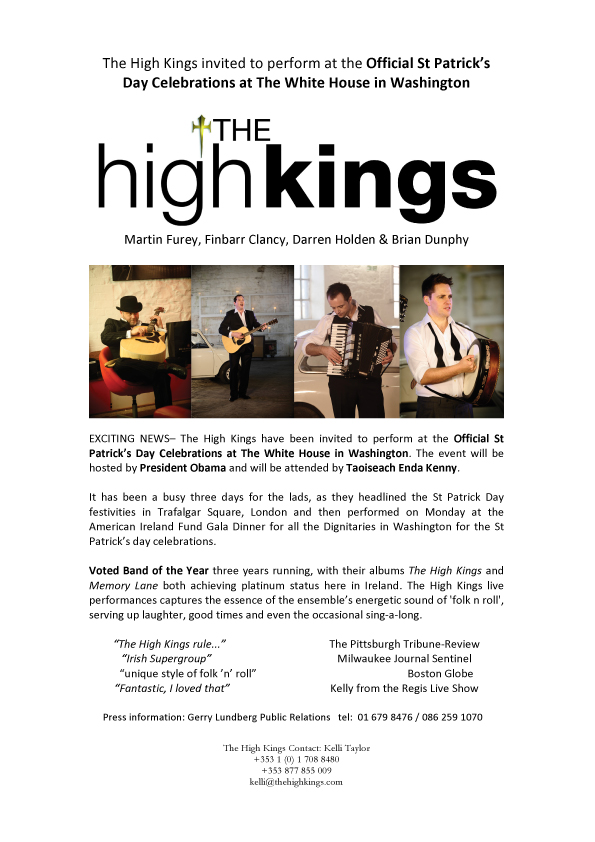 Think we can safely say that it was quite a night!!
A few words from Darren
"WOW!! Now that was an absolutely incredible night! One of the best ever. We rocked The East Room in style tonight, right after an official photograph with President and Mrs Obama. What a lovely couple. Our own PM Enda Kenny was there with us, along with his good wife for the second night in succession. This is the stuff you tell your kids and grandkids about in years to come. We take lifelong memories with with us tonight. Big thanks to The White House staff who looked after us so well today. And more importantly, huge thanks to Maggie and Dick Holden for encouraging my love of music."
Next day it was back on a plane and heading home to his family in Ireland taking all his memories to share with them. But, with his feet barely back on home soil, he was eager to share them with us too.

“Hi folks. I will be chatting to Sue Nunn about playing The White House, on KCLR FM at 9.30am this morning"


CLICK HERE to listen to the interview
Check out the personal photos from the White House courtesy of Darren and www.thehighkings.com 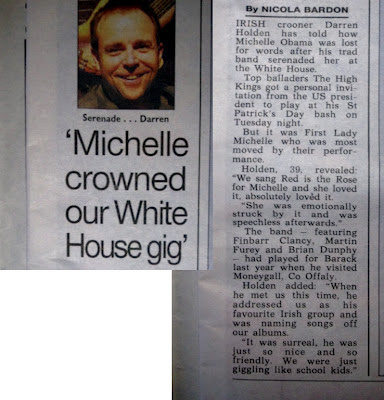 We hope you have enjoyed sharing Darren's experiences of performing at the White House for the second time in his career. We'll be back with all the news, video and photos from the St Patrick's Day Festival in Trafalgar Square very soon.

Darren and the DH Team
Posted by Darren Holden Official at 20:43