It been a little while since we have done a news update as the focus was on the Kilimanjaro Climb For Kids Documentary with our last blog. We will start with a little update on that before moving on to the High Kings shows in Ireland and across the pond.


Kilimanjaro, the reaction!
"Absolutely bowled over by the enormous reaction to the documentary tonight. The phone and FB hasn't stopped!! What's most amazing about all this, is not only the lifelong bonds that are formed with everyone who climbed Kilimanjaro, but the awareness for "Our Lady's" in Crumlin thats has been highlighted again throughout the country. Thanks so much for all of your kind comments tonight! Its a proud moment for us all."


"Climb for Kids Director Michael Sheridan has confirmed the official RTE viewership figures from last night's documentary was a whopping 365,000 viewers or 25% of audience market share!!!"
One final newspaper article, received too late for the Kilimanjaro special
Sunday Mirror 17 July 2011 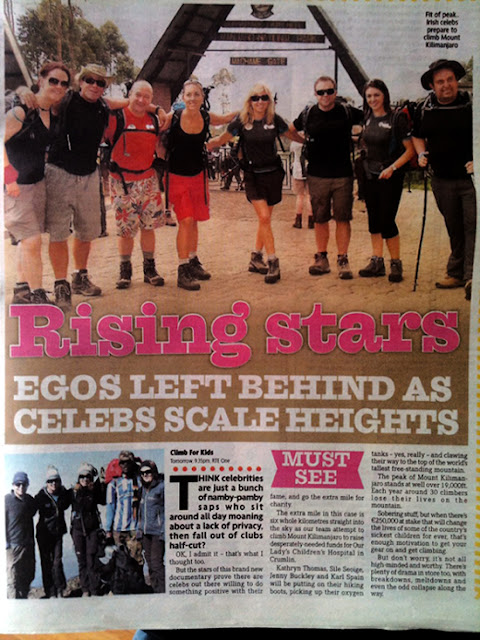 High Kings in Ireland!
"Castlebar!! Time and time again the Royal Theatre just never lets us down! What a night! What a party! What a crowd!"


"Kilross! Amazingly out if control crowd with loads of old friends!! Loved it!!
On to Killarney!!!"

The High Kings set off for Killarney for the first of their 3 shows scheduled there this summer. They were performing in the Ballroom of the INEC Gleneagle Hotel and the tables in the dance floor area to make way for additional seating. Just as well as the sign above the box office said 'Standing room only for the High Kings' The audience were treated with not just one, but two performances by young wannabee High Kings.

"INEC Killarney! Literally wedged with a sensational audience who wanted it bad! They got it too! Brilliant night. Here's to next Saturday. If it's anything like tonight we are in for a treat!"

"Morning all. About to head to Cork for tonight's show with John Spillane at Neptune Stadium. Should be a blast.
Huge thanks to the 5th High King Adam O' Sullivan for once more tearing the house down with his dazzling vocal skills last night. The man's a legend. Sam Dunphy also showed us how it's really done too, a born entertainer."
"Just met the main man!!" 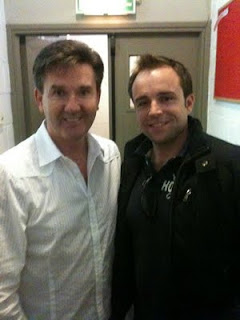 This player has a number of videos recorded at both the Killarney and Cork shows.


Off to Donegal, then back to Killarney!

"Tomorrow marks a new chapter in The High Kings domestic touring schedule. We fly to our show in Co Donegal! I kid you not."
"The new HK mode of transport." 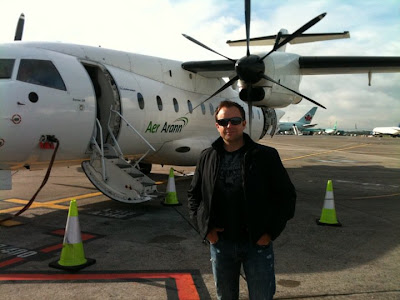 "Wow! Long long day, but tonight's superb audience made it so worthwhile.

Fantastic crowd here in Ballyliffin, who sang and laughed their way through 2 hours with us tonight. Great fun."

"Up at 6am to fly back to Dublin, and then on to Killarney for another concert at the INEC tomorrow night."

"Massive night a the INEC! Just Massive. Loudest crowd in months. So nice to have the family there too. Makes it extra special to sing the songs my mam and dad taught me, and dedicate it to them. Homebound in the morning."

Cleveland Irish Cultural Festival
As the High Kings set off for America and their first festival in Cleveland OH they were hearing of soaring temperatures and knew they were going to be melting in the heat. They didn't expect that there would also be a fear of drowning and washed out shows!
"Just ended up a very long but enjoyable day of travel. Spent the day laughing with Tommy Fleming who is also on the festival this weekend.

The heat is unreal here in Cleveland, and tomorrow we kick off the first of 5 shows! Bring it on."

"Wow, did I sleep that long!! Beautiful day outside, Dunphy is at the pool! :)
Gym first though! Need to wake up."

"First gig of the Cleveland Festival done! Great crowd, and after todays massive thunder storm it was actually a lovely night! Thanks to everyone who turned out to see us. Back at it again tomorrow."

"OK Cleveland....What's with these storms!!"

"Well we reached the halfway point in the show today before yet another massive storm disrupted proceeding's. People ran left right and centre for cover. This weather is nuts!

Tonight's show depend's on how the clouds behave so...let's see!"

"Tonight's show has been cancelled due to the rain and storms. Oh well, at least we have tomorrow!"

This player has a number of fan videos of the High Kings performing at all the 2011 US festivals.

"Cleveland! Thanks for a great weekend! Huge crowd tonight for our last performance. Brian and I joined Tommy Fleming tonight in his show, for a performance of "Red is The Rose" and " Raglan Road" Really enjoyed that!

Early start in the morning for me as I am going to favourite city for 4 days! Woo hoo!!"

"Loved being back in the Big Apple. Loads done and the buzz here is electric as always. Heading to Syracuse to hook u with the guys tomorrow night."
Darren did hook up with the guys in Syracuse ready to hit the next festival on their schedule in Frankfort NY, The Great American Irish Festival! We'll be back with news of that soon.
If you don't want to miss anything, sign up for our periodic newsletter and get all the news delivered to your inbox  Click Here
Thanks for your continued support
Darren and the DH Team
Posted by Darren Holden Official at 22:11